I felt like I just banged my head against the wall all day long. I hardly left my office, and didn’t even take a lunch, snacking a bit and sipping a late Soylent. I just couldn’t figure out why one of my new desktops wouldn’t image, or why two of my laptops won’t wake up from sleep mode. I ultimately made my way to the shop for the last hour of the day so I could chat with Gary about it, and ended up leaving the computer there to try again tomorrow morning.

When I left work, I went by my parents’ house and finished up some eggplant soup before Dad came over to look at my toilet. The closet flange was just too big for the pipe, but we didn’t want to chip out the foundation to fix the poor build. We went to Lowe’s and decided to try a non-wax seal first, but it ended up being too small to fill the void. It took another trip to get two wax seals to fill in the gap. We ended up replacing the rest of the components as well since we already had everything torn apart anyway. It took too long, and it was pretty unpleasant, but we finally got it all back in place.

As I finally got to wind down, I saw a whole team of guys playing Overwatch, so I stayed up a little late and joined in for a couple rounds before bed.

I don’t have time for toilet humor. 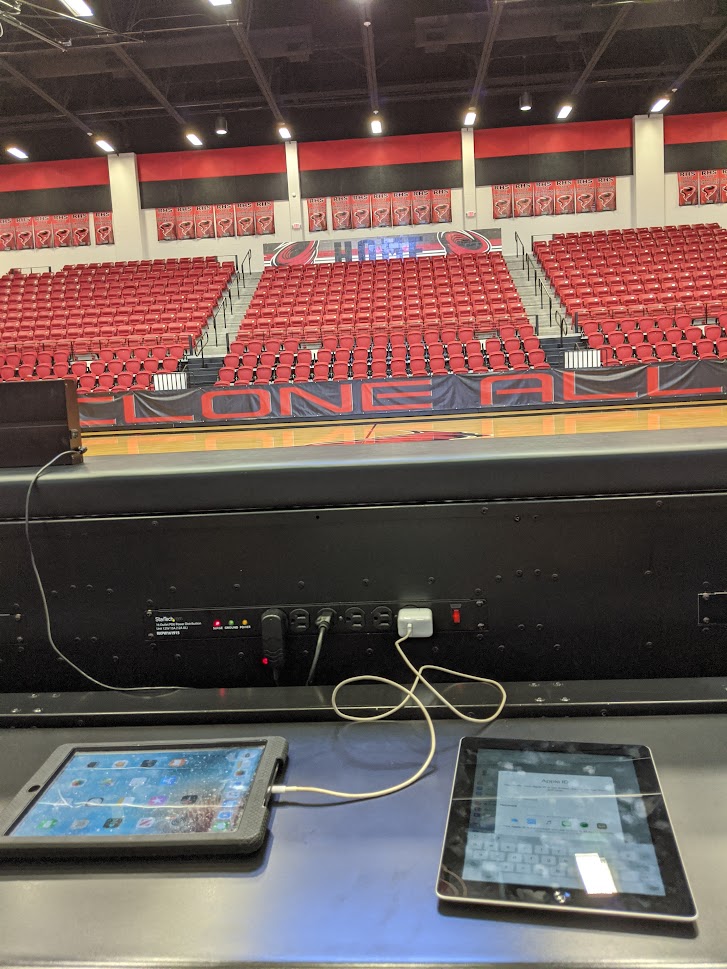 I didn’t really have anything new come in today, so I got to spend my time working on some older work. I started at the arena messing with one of their Crestron iPads. Then I tinkered around in Group Policy for a while because I couldn’t figure out why a printer wouldn’t deploy properly. I ended up heading back to the shop, but lunchtime snuck up on me. Gary and Heather were going to Taco Villa, so I tagged along and we brought food back to the shop. Then Gary helped me pick through my Group Policy issue. It all came down to a rogue space in the share name of the device.

Back at the high school, I finally got the Crestron app working after receiving a call back from our vendor. Then I ended the day setting up a bunch of computers in the field house. Autumn and her friend were at the high school for the Harlem Globetrotters, but Summer came to get them and I just went home.

Dad and I talked a bit more about my clogged drain pipe this morning, so I dug out an old, long piece of aluminum to shove down the hole. I poured some more boiling water down the hole to fill it up, and then shoved the stick down as far as I could go. It bent around the angled pipe almost perfectly, and I managed to clear the drain. I still wasn’t sure if there were any roots inside it, and the closet flange was still offset on the pipe, so I left it for another day. I ran by Lowe’s to check out some parts to fix it, and to pick up a windchime on clearance.

Heather had told me during lunch that the Globetrotters event was free for employees, so I tried going out there to check it out. There was a huge line of people, and none of the other employees I talked to knew anything about it being free or even discounted. I wasn’t even aware that it was a charity event, so that made me feel even less good about trying to get in. I ended up going home and doing more research on toilet repairs until bedtime.

We started testing today, so it was pretty quiet. It sprinkled for most of the day too, so I didn’t make it down to the field house. Gary had a few minutes to call me and help with some things I had been tinkering with, and I think I learned a bit, and maybe even proved myself a little.

I took an early lunch to meet Ronda, Steven, and a coworker of his at Ruby Tuesday for $5 salads. It was pretty quiet there today, but it’s possible that was just due to how early we were. I went by the shop for a little bit afterward, then went back to the high school in the rain.

I guess I was a bit too ambitious, because I didn’t quite finish all I wanted to before quitting time. I actually ended up staying pretty late, fighting with a replacement computer I deployed. I actually didn’t even finish, so I’ll have to check on it in the morning as well.

Dad left me a big, flat drain tape to run up under the house, so I met Summer at home to see what we could do. The girls sat in the car the whole time because I don’t think they realized how long it was going to take me. I ran the snake all the way up the sewer pipe without too much trouble, so I had to coil it all back up and go down from the inside of the house. It wasn’t too difficult in spite of how gross the toilet mounting bolts looked. They were so rusted that I could just about pull the whole thing straight up.

With the toilet out of the way, I could see a bright orange root snaking around the drain. Inside was a literal wall of cat poop, completely blocking the pipe. Water could only seep out the drain, and a lot of that was probably my fault for flushing dry cat poop out of the litter box. I’m about at the point that I’m ready to quit using that half-broken automatic CatGenie and go back to a regular box. I called Dad, and we decided to get Roto-Rooter back out to properly snake the drain.

I spent the rest of the evening cleaning up a bit, then went to Summer’s for the evening. All the extra work running around the house made me hungry, so I cleaned up some random leftovers and eventually made it to bed.

Jason started us off with a pretty lazy morning. I didn’t hear it, but I was assigned to pull some cable with Allen at Sequoyah. The line was supposed to already be there, but needed to be re-routed through the cafeteria. We found the coiled up cable without too much trouble, but the ceilings were high and even our longest ladder from the shop wasn’t tall enough to be of any use at all. To get started, I attached the tone generator on the end we had, then went to the closet to find the other end. I spent 10 or 15 minutes going through the nest of cables coming into that tiny switch closet, but couldn’t find it. When I went back to the other end, Allen had unhooked the tone generator and started trying to route the cable. He said he thought I went to the bathroom, even though he watched me hook up the tone generator and test that we had a tone coming through the line.

Once we got the tone generator back on the line, both of us went back to the closet and still couldn’t find a tone, so I started poking around in the ceiling and ultimately found where the line had been cut just inside the hallway, less than 20 feet from where we needed it to be. Allen wanted to run an extension from another drop in a nearby closet, but I refused. I traced the line back to see what else I could do, and then we took everything back to the shop for lunch.

Gary, Heather, Zach, and I walked to Smackin’ Wings and Things for the Philly cheesesteak fries. It took them half an hour to get our food to us, which was pretty typical. I didn’t really care much for the special, and it didn’t feel quite as loaded as anything I’ve had there before. I finished it just because it wouldn’t have been any better reheated, but I walked out filled with more regret than fries.

After lunch, I stayed at the shop and re-imaged the four computers Jason imaged for me because he used the 2016 LTSB version instead of the newer 2019 LTSC. I guess maybe he had forgotten that none of our Adobe licenses are compatible with the 2016 release, but he got really snippy and ridiculous when I told him what I was doing. As soon as I told him I’d just deliver them myself, he and Allen disappeared as if by magic, to I know not where. 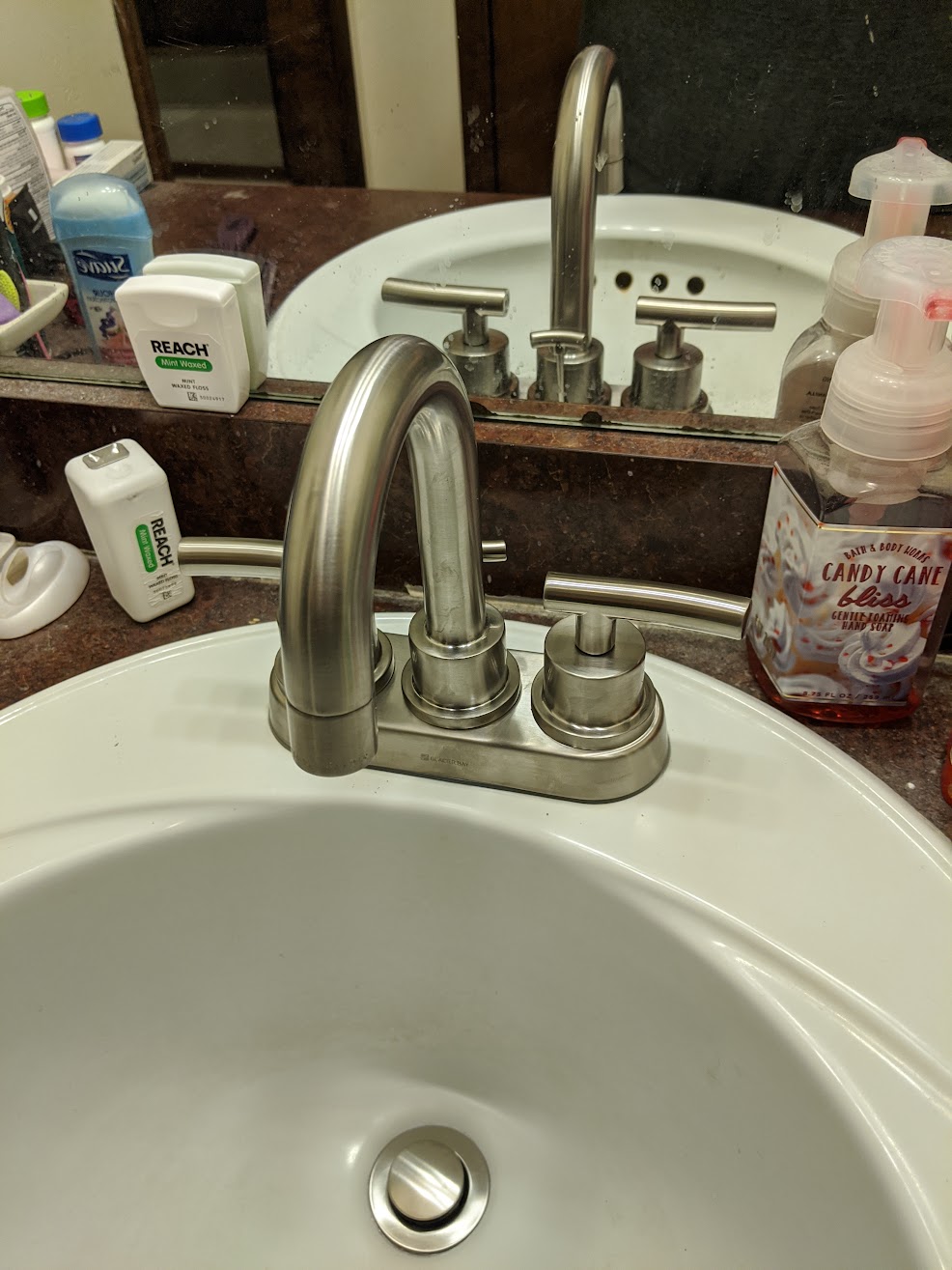 When everyone left, I delivered my computers to the high school and headed home. My new bathroom faucets came in, so I decided to be handy and start on the replacement project since the one in my master bathroom had gotten to leaking quite badly. I had just barely gotten started when Summer arrived with Eaddie. Autumn was staying with her grandmother so she could finish her dress for the dance tomorrow. The remaining three of us headed to Lowe’s for some supply hoses and silicone. I ended up spending about three times as much on hoses as I wanted, but they didn’t have anything cheaper than the stainless steel braided lines.

We ended the evening with a late dinner at New China, and then headed home where I continued my work in the bathroom. The girls seemed pretty tired and passed out kind of early, but it took me a few more hours to break out all the old corroded faucets. I managed to get everything in place though, and I didn’t appear to have any water leaks. The silicone needs 12 hours to cure, so I won’t get to actually test the faucets until tomorrow. At least the spare bathroom won’t be as difficult since it already has new supply lines that aren’t rigid copper.

The more I tear apart, the less mystical it all seems. I may fix my bathroom yet…