We got three pallets of monitors in just before lunch today. I was told I would have three labs worth, but I only got two because other people wanted brand new monitors instead of the agreed-upon hand-me-downs. I get it. I understand why. I was just a little aggravated because I asked, got a count of how many I needed, and still had plenty of decent ones to go around for the handful that were needed elsewhere. That’s why we have plans. But that’s not how we do things here. Here, we make plans specifically so we can not follow them.

Allen and I went to Long John Silver’s for lunch, and it was super good. The girl charged us both a dollar too much, so after her manager took our receipts, she brought us a couple crispy dollar bills. I wasn’t going to fuss over sales tax, but don’t think I didn’t notice.

After lunch, we went to actually deploy the monitors, then brought the old ones back to the graveyard for storage. I had meant to keep a bunch in my office, but that didn’t happen either. I guess I’ll just have to transport them back again myself. Any more, I hate taking a team with me anywhere. Especially if it’s more than two other people. It’s much easier to direct one person without getting a bunch of grief over it. 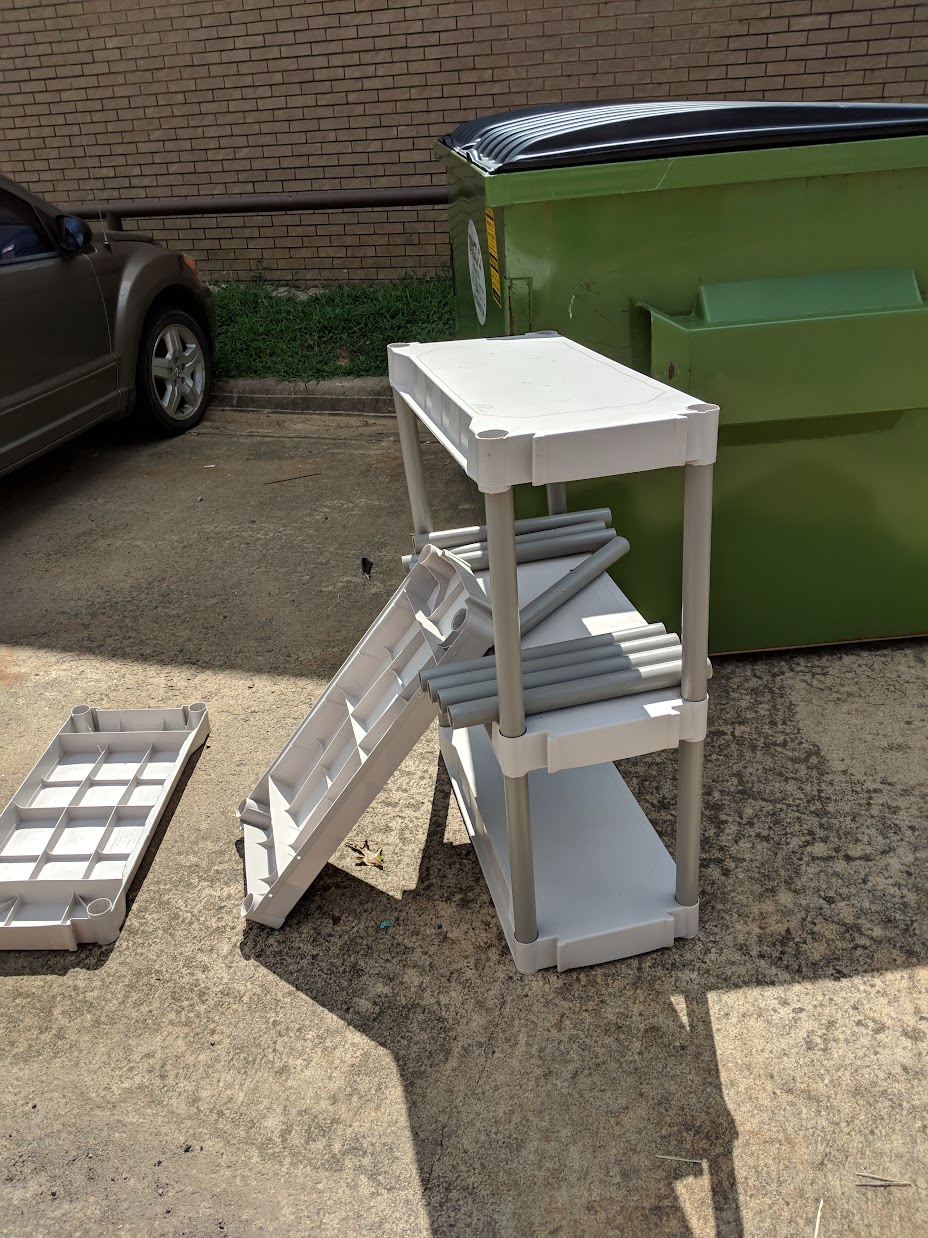 Earlier in the day, I had seen a couple girls from upstairs bring a plastic shelf down. I thought they were putting it in the back of someone’s car, but they actually ended up throwing it away. It was still in the dumpster at quitting time, so I started digging it out. Dale stopped to help out of curiosity, and because most of the vertical pieces had made their way to the bottom. I had fished all but one of them out when I accidentally caught my glasses with my thumb and flung them into the middle of the dumpster. I was super lucky that they landed on some cardboard and slid down to the bottom and didn’t actually break or get super gross, but at that point I had to give up reaching in with cardboard sticks and climb all the way in. I got two ladders, set one up inside and another outside, then climbed on in. I retrieved my glasses, then found the final piece to the shelf. It went together splendidly in my garage, but I think I’ll be moving it inside just because it’s pretty clean and would make for better liquor storage than what I’m doing now.

I went to my parents’ house for some eggplant soup for dinner, then went to visit with the girls for a little while. Eaddie was playing LIMBO when I got there, and it was nice to see it hadn’t been completely forgotten by everyone. We watched a couple episodes of The Office before I had to head home and meet up with Clint to play some Overwatch. I did great. It was the rest of the team’s fault that we lost our second match. Ultrawide is interesting, but I sorely need a new graphics card.

You have been Monitored.