Don't Trust What You See

Don't Trust What You See

I got to meet with our security software vendors today, and got a bit of an overview of how things work. They took us out to Fat Daddy’s for lunch, which was nice. It didn’t seem like they left a tip though, so I dropped some cash on my way out. After lunch, a bunch of the guys that actually use the security software came down for a reason I don’t fully comprehend. I guess it was sort of a Q&A, but most of it seemed to be stuff we could have answered. It seemed like maybe we were trying to reassure them that this was the best solution that fit all of our needs without cheaping out.

After work, Jesica came over to have some leftovers from the weekend, and watched Pretty Little Liars. I like to think the show is about some liars that are pretty little. Like maybe they’re much shorter than average. I was not entertained. I’m also pretty sure the villain in this episode wouldn’t have had a clue how to do some of the things she was doing. I may be judging a book by its cover, but this seemed like some next-level hackery. 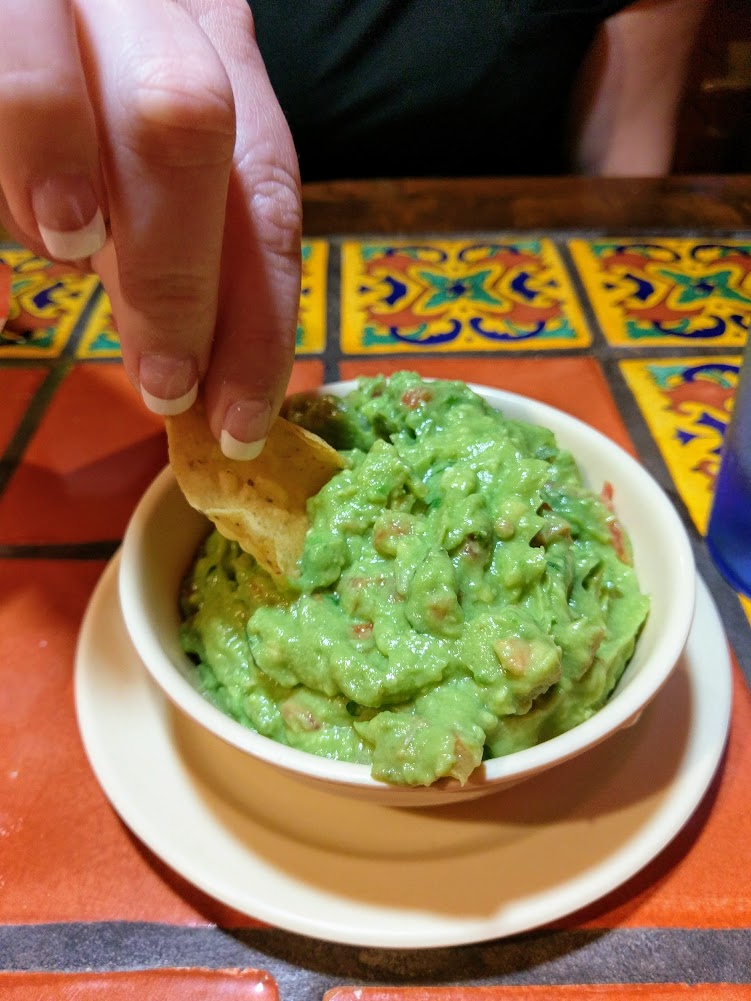 I feel so useless this time of year. I keep feeling like I’m not doing enough.

For lunch, Allen and I went to La Plaza, a new Mexican place just up the road from our office, owned by the same folks from La Plaza Mexicana in Dardanelle. I had the carnitas, which were pretty great. Allen’s nachos looked awesome too.

After work, I made an awesome leftover burger, and then Jesica wanted to go out for Mexican herself, so I sat and watched her chow down at Morello’s.

I know I’ve been screening Harry Potter for MOOvie nights, but even those are too spaced apart, so I’ve been skipping through the movies to refresh myself the past couple nights. I wish someone else could marathon whole series with me. I’ve been wanting to watch the Lord of the Rings extended editions since they came out, but nobody ever seems even remotely interested in spending literally half of an entire day watching it with me.

I’m pretty sure my patronus is a taco.

I got up this morning to meet my family at Linh for lunch. I had a tremendous headache, that made me feel worse for the fact that it was a beautiful day outside. I would have liked to ride somewhere nice.

After lunch, I brought my mom a new PS3 controller because hers started messing up. I didn’t stay long due to the headache, and returned home to try and mellow out. And just like that, the weekend’s over.

My Uncle Giao and Aunt Teresa came to visit with the grandkids. It took me all day to get dishes and the rest of the house cleaned up from last night and then get out of the house, but I eventually made it out to my parents’ house to visit with everyone. The kids seemed to love the Google Home there.

Afterward, Jesica wanted to borrow my washing machine to wash her new comforter, but it seemed too big to fit and she ended up going to her father’s to wash it.

Finally it was an evening of Rocket League, followed by Worms Reloaded with Johnny and Aaron into the early morning. Brandie followed the breadcrumbs from an Instagram comment to discover the blog, so she earns the new site’s first Creeper Award in spite of the whole thing being public for the sake of peer review. We’ll see you next time. Same cow time, same cow channel! 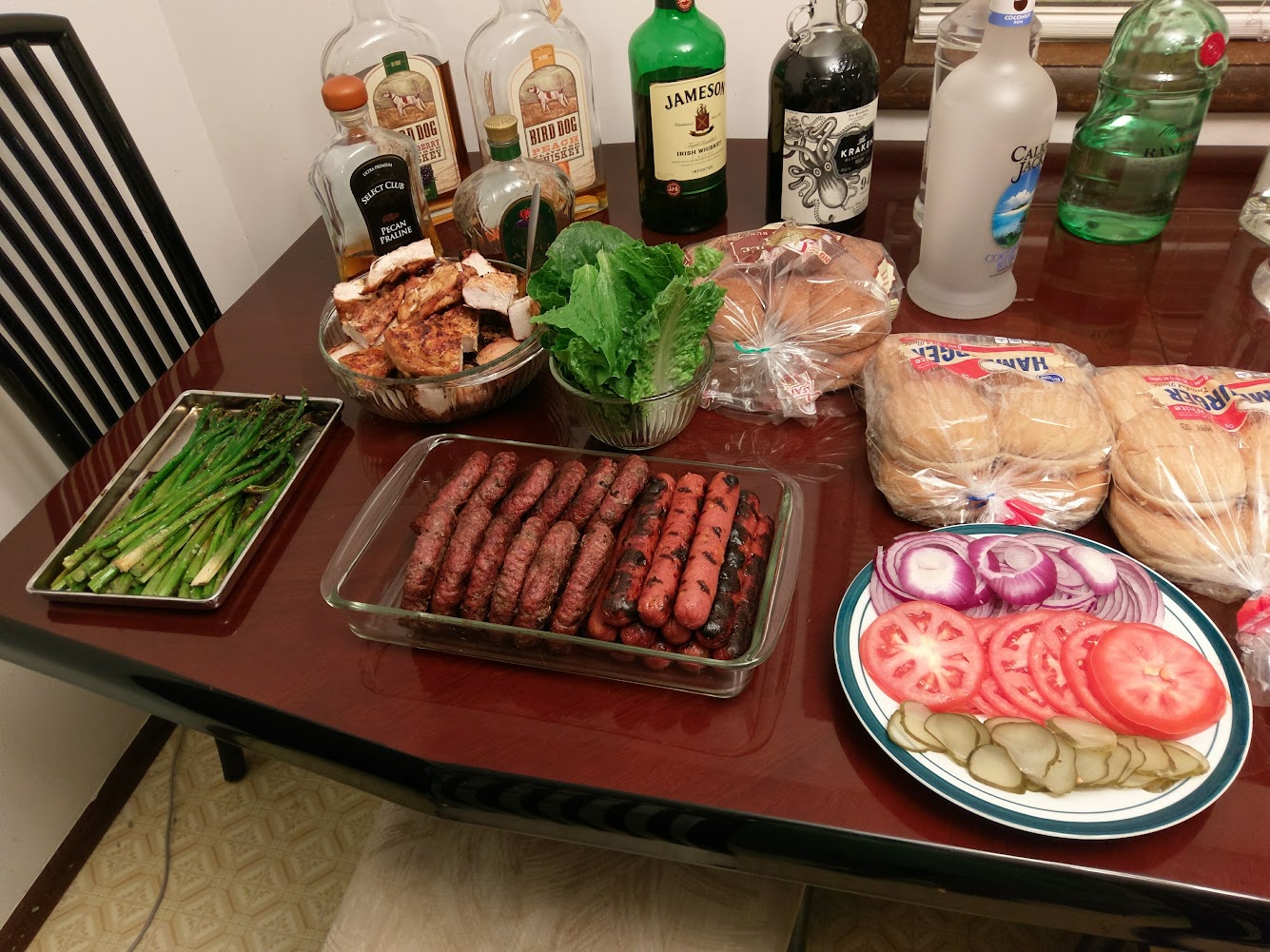 It finally happened, after all those failures to launch. It’s MOOvie night.

Work was incredibly slow, with most of the schools having activity days celebrating the end of the year. The real work started once I got home.

Jesica came over after work to help prepare her dishes, and then picked up Will after he finished closing the store. Mayra came over as soon as she got out of her store. All the food turned out pretty awesome.

I made a mix of differently seasoned  chicken breasts, some pre-pattied beef/pork burgers from Walmart that were both time-saving and delicious, and the always-loved jalapeño cheddar smoked sausages. The cheese dip was on point with a touch of chili and cream cheese with jalapeños. 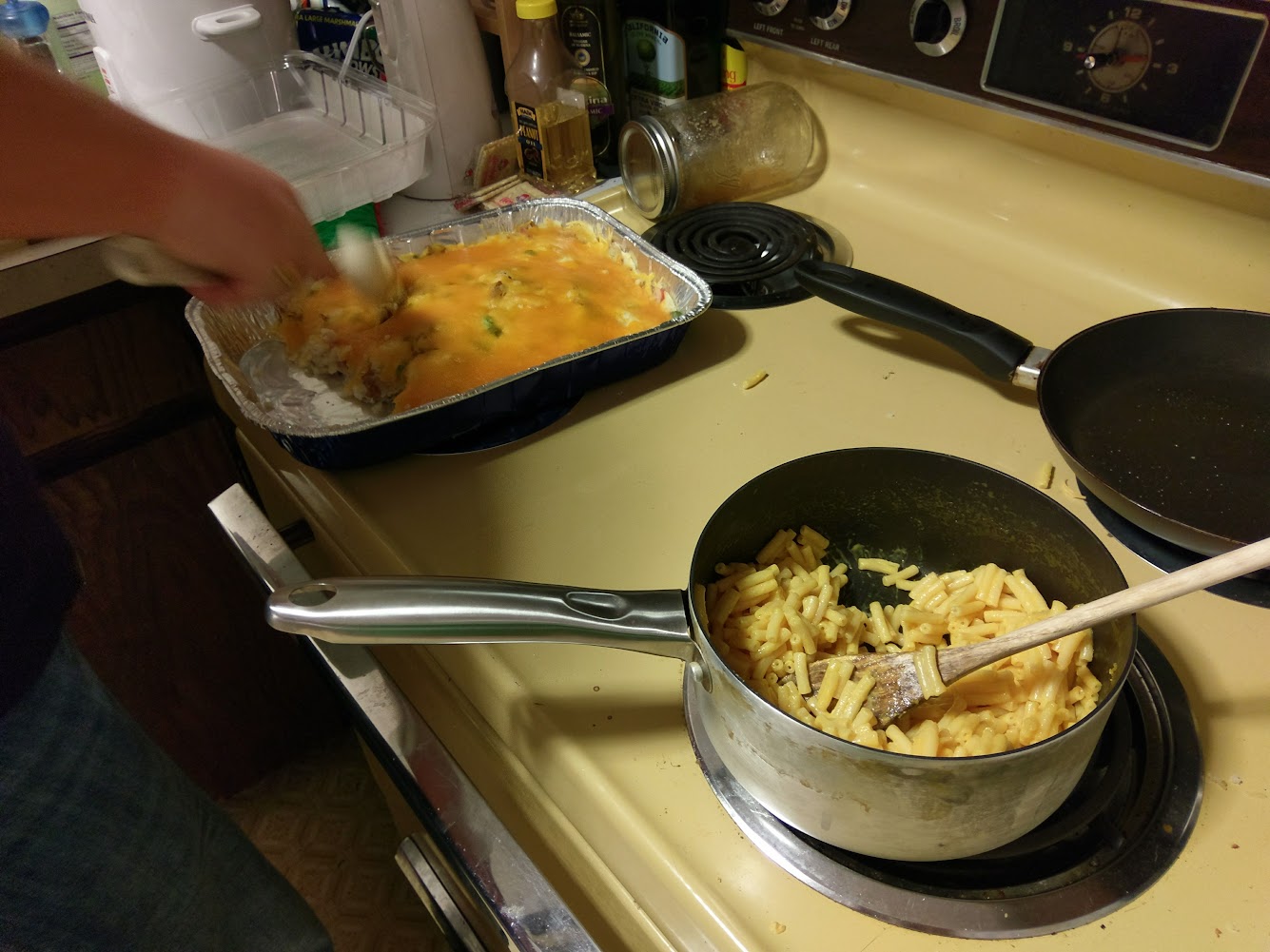 I hated that Jonell couldn’t make it since she seemed to be genuinely excited, but apparently she’s repping the store in San Fran. I’m a little jealous.

Otherwise, I think everything turned out pretty well. Maybe we can finish the series with a low-key double feature. I love doing it big, but it’s always bittersweet when more people don’t show up.

But that’s life I suppose. You go along and then suddenly…Poof!

We had a big assembly today to sort of celebrate the end of the year. It was discouraging to hear some of my team fuss over it beforehand, because it seemed like a decent enough event to me. There wasn’t a huge amount of fanfare, but those that were retiring were paraded across the stage as their superiors said words. Employees of the year were recognized, and received some small tokens as well. It’s tough for small departments like ours where we basically have to rotate each other through the process for employee of the month awards, but even in my first year here, I could tell Gary was deserving of the recognition of overall employee of the year. He may put on a grumpy hat most days, but he’s truly one of the greatest guys I’ve ever known, and I’m happy to get to work with him after all these years after graduating together. I never even knew he was that much of a tech guy, but he’s about as sysadmin as you can get.

We got to go home a bit early after the assembly, but I didn’t bother to use any of that time to actually clean the house like I intended. Jesica came over after work, and we went to Walmart to pick up some food for MOOvie Night tomorrow. We ran into Kevin and Brandi, but he has other plans tomorrow. Hopefully I get at least a couple newcomers though.

What’s the difference between a technology tech in this district and a large, deep dish, pepperoni pizza from Domino’s Pizza?

I kind of hate how slow it’s gotten as it’s coming up toward the end of the year. I feel relatively worthless, and it’s making me less motivated everywhere else.

I finally went to pick up the computer chair I ordered at Walmart. Nothing fancy, but it was 16 bucks. It’d be stupid to pass on that. I guess.

I spent the afternoon learning how to use Minecraft: Education Edition so I could teach the teachers. I was supposed to meet with them at the computer lab, but they backed out.

I didn’t do anything else at home aside from watch Google I/O. Nothing too thrilling, but I couldn’t look away. I’m just surprised they didn’t launch another communication app.

Not much to remember about today. Stale tacos for lunch? Bleh.

Another kid in trouble for marijuana at school. Kids are dumb.

My dad made a corned beef for dinner, which is one of my favorite things.

Today was a long day at work for no particular reason. Oakland had their field day, which kept the staff there super busy. The weather started out super nice all morning, which was awesome on the bike, but then got hot really fast in the afternoon. I’m not ready for full-on summer heat. I need to arrange a good ride and sail before that happens.

After work, I spent some time on the phone being told to call my health insurance company with my questions. I tried calling them admittedly close to closing time, but still early enough that I wouldn’t have expected a “call during business hours” message. Health care is fine, though.

I went to visit my parents for a spaghetti dinner, and they made some garlic bread for me the way we used to when I was growing up, using a loaf of french bread instead of frozen slices they’ve started using in recent years. I think it’s way better that way, so I don’t know why they switched after we moved out.

After dinner, I ran to Shoe Carnival for some new sneakies and a pair of dress shoes since my others were worn from working at Apex. I tried getting the Fort Russellwood guys to help, but was markedly unsuccessful. I happened to finish up right as the guys from AT&T got out, so Mayra and I went to Buffalo Wild Wings to get her something to eat, then to Walmart for a couple items.

Mayra seems to be a lot like me when she shops, and it was really nice to have someone similar along for the ride. We went in to pick up a computer chair I ordered the other day and some toothpaste for her, and ended up covering most of the store. She really made it a lot more fun, and I enjoyed having her along for the company. Maybe I can convince her to go again before MOOvie night.

You guys are the opposite of friends. :( 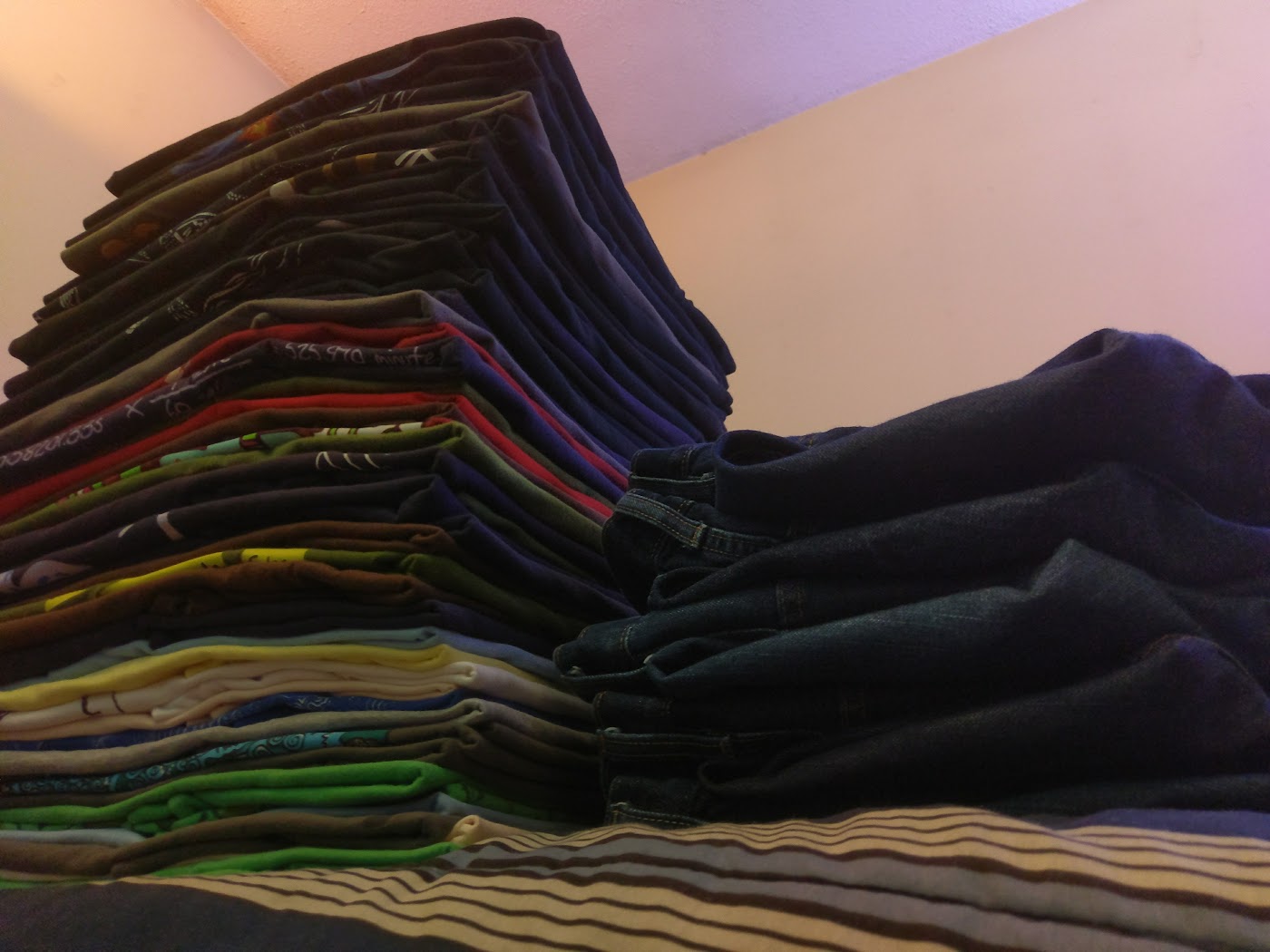 When you’re feeling unmotivated and nothing makes sense, do laundry.
You’re guaranteed at least some minor feeling of accomplishment for the basic task, and it’s a good way to kickstart your mood.

I went to my parents’ house for dinner for Mother’s Day, but Mom wasn’t feeling up to going out, so she cooked for Dad and me.