Summer had a Freezin’ for a Reason 10k in Conway this morning, so I got up about 45 minutes earlier than I do during the work week and picked her and Eaddie up. It was super foggy for a good portion of the drive, but it cleared up as the sun came out. We made it with plenty of time to spare for registration, and then the race started late as well. Eaddie and I sat in the car for most of it, and I accidentally burned through a bunch of data on my phone. We caught Summer at the finish line and watched the first part of the awards before taking off to find some lunch.

Don Pepe’s across the street wasn’t open yet, so we ran by the nearby Neighborhood market to kill some time while Summer got changed. By the time they were ready to go eat, they decided they wanted sushi instead, so we went to China Town. I like a lot of the things they have that aren’t available at any of the restaurants in town, but a part of me is starting to get a little bored of it. When we finished eating, we headed across town to do some shopping.

We spent the most time in Kohl’s, where I had to pick up an online order from the beginning of the week. I picked up some super cheap clothes as well. Then it was Target, Sam’s, Bed Bath & Beyond, and finally Petco. Target and Sam’s were both ridiculously busy for some reason. BBB wasn’t bad, but also didn’t have any remarkable deals at all. The overall winner of the day was Petco, where I had a $10 off $30 coupon, and I picked up some fish food that rang up for a penny.

Eaddie had gotten sick of shopping after about three minutes, and she passed out in the back seat long before we started for home. When we did finally get home, we spent the rest of the evening watching a bunch of Glee.

Do you know what goes down in Lima Heights Adjacent? Bad things! 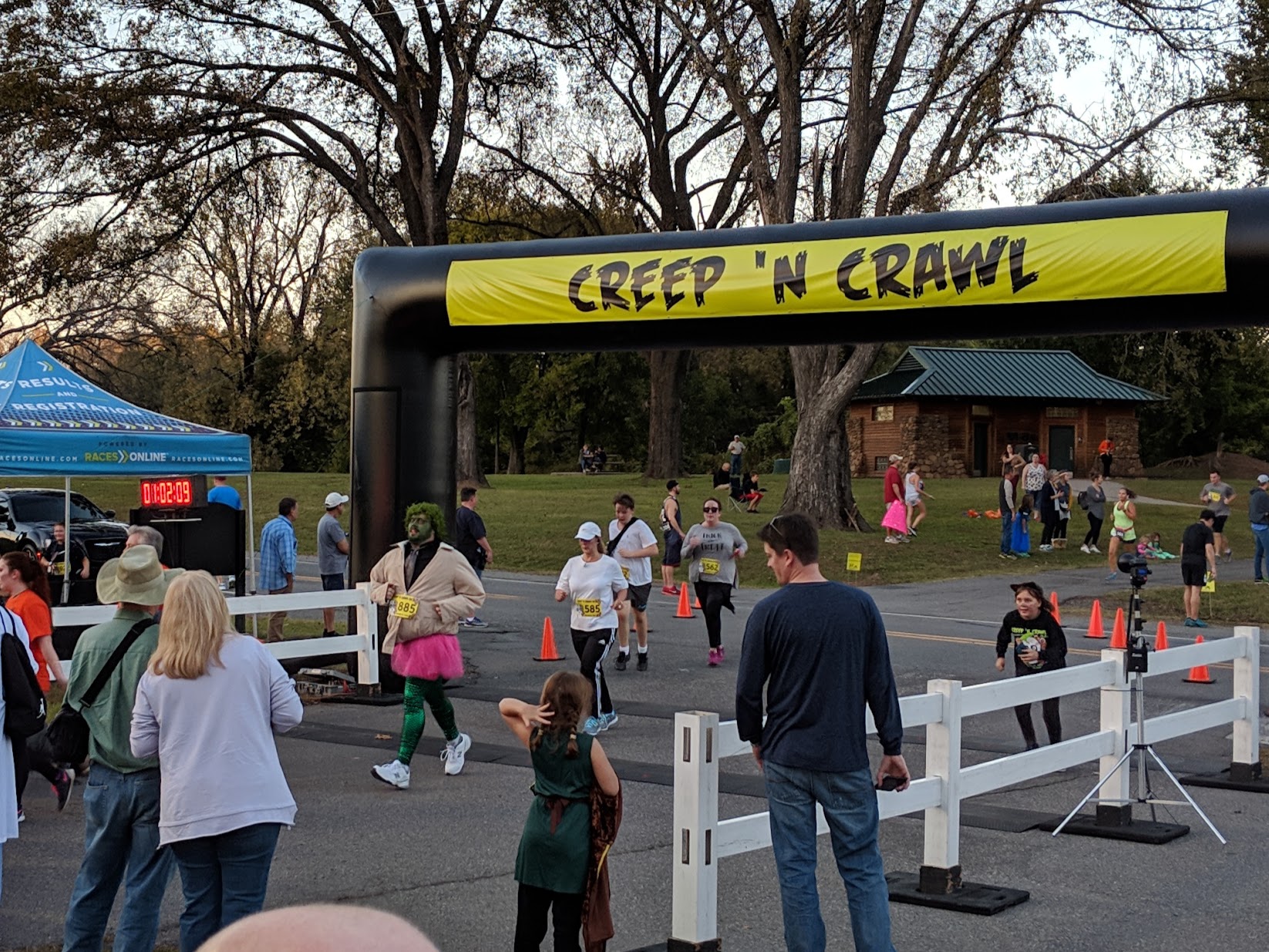 We slept in a while this morning until we had to leave for Summer’s 10K in Little Rock. We stopped by McDonald’s for some chicken tenders on the way out of town, which were actually really good, and then made our way to Conway for our first stop. I had a Shoe Carnival reward burning a hole in my pocket, so Summer scored a couple pairs of boots in a BOGO free sale. I wanted to go to Old Chicago for lunch while we were in town, but we ran short on time and Summer wasn’t hungry enough to eat. We made a quick stop at Dick’s to check for potential kayaks on sale before departing on the last leg of our trip.

Thirsty and still a bit hungry myself, we stopped by another McDonald’s on the way out of Conway for some drinks. The kid brought one of our drinks out, but said they didn’t have the equipment to make the slush I ordered even though there was a giant window cling for it on the front of the store. He offered to make me another of what we did get, but I ended up having to go inside because he forgot to bring the replacement drink out to me after it was made. I guess nobody cared enough to find out why there was another drink sitting on the counter at the end of the makeline. 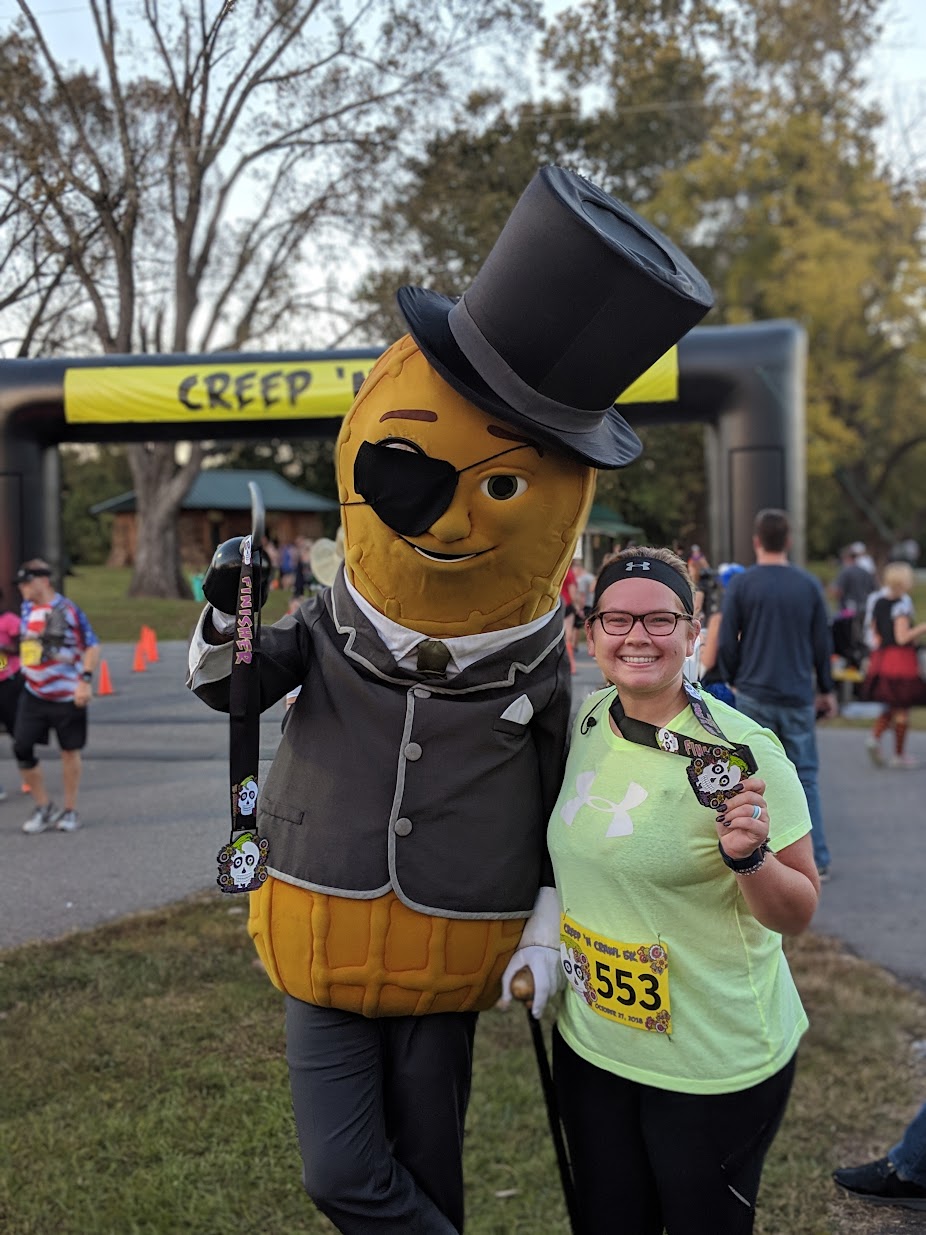 We finally arrived at the Creep ‘N Crawl 10K/5K shortly after Hannah and Dylan, and spent most of our time waiting in line with the girls for the bathroom. There were some interesting costumes there, but Old Greg was one of my favorites. Some of the costumes definitely didn’t seem run-friendly, but by golly they did it. My number one favorite had to go to a couple of girls that were dressed as a cop and robber, and ran the race handcuffed to one another.

Summer and Dylan took off first in the 10K, and then Hannah took off 15 minutes later. Dylan ended up getting second place in his age group, so he got a tiny trophy. Hannah and Summer both came in squarely in the middle of their categories, but Hannah arrived first since she was only doing the 5K. While we were waiting, I bumped into Officer Beyette, and he offered to take my picture with Hannah and Mr. Peanut, but I declined and said I wasn’t actually with them. I assumed he didn’t remember me from the time I trolled him at Oakland, but it was funny to me all the same. 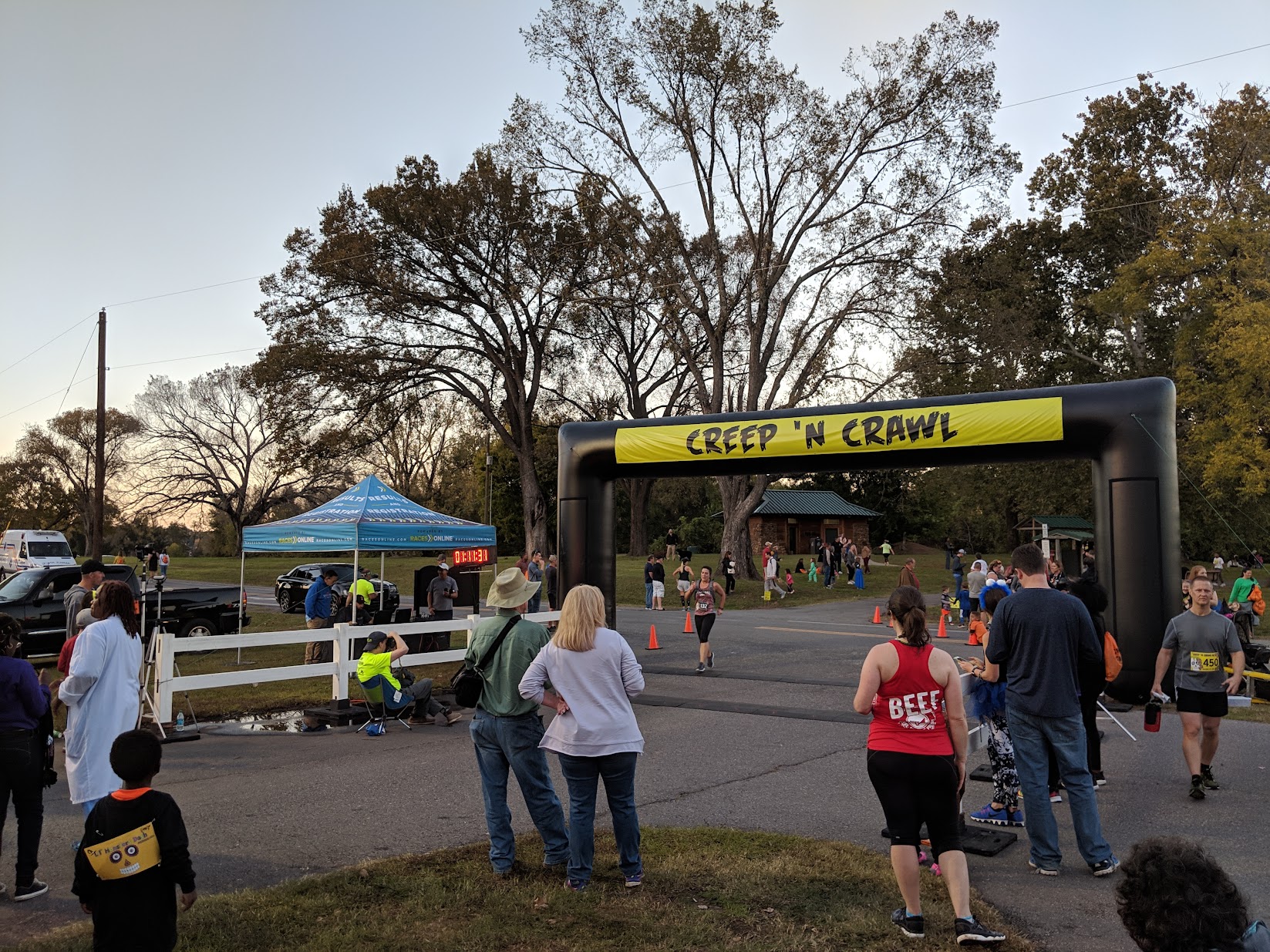 I started to worry a bit about Summer because she was a fair bit behind her goal time. I expected her right along with Dylan, but the clock just kept on ticking. She ended up getting sick in the middle of the race, but she puckered up and pushed through to the end. I made the trek back to the car to come back and pick everyone up, and we headed to Dave and Buster’s for some evening fun.

They didn’t have Angry Orchard on tap, which was the girls’ choice drink, so we didn’t get to experience the 100 oz tower. The food was pretty decent, the drinks were overpriced, and the games were fun while they lasted. We all decided to hold on to what tickets we earned and, tired from the day’s activities, called it a night and drove on home. 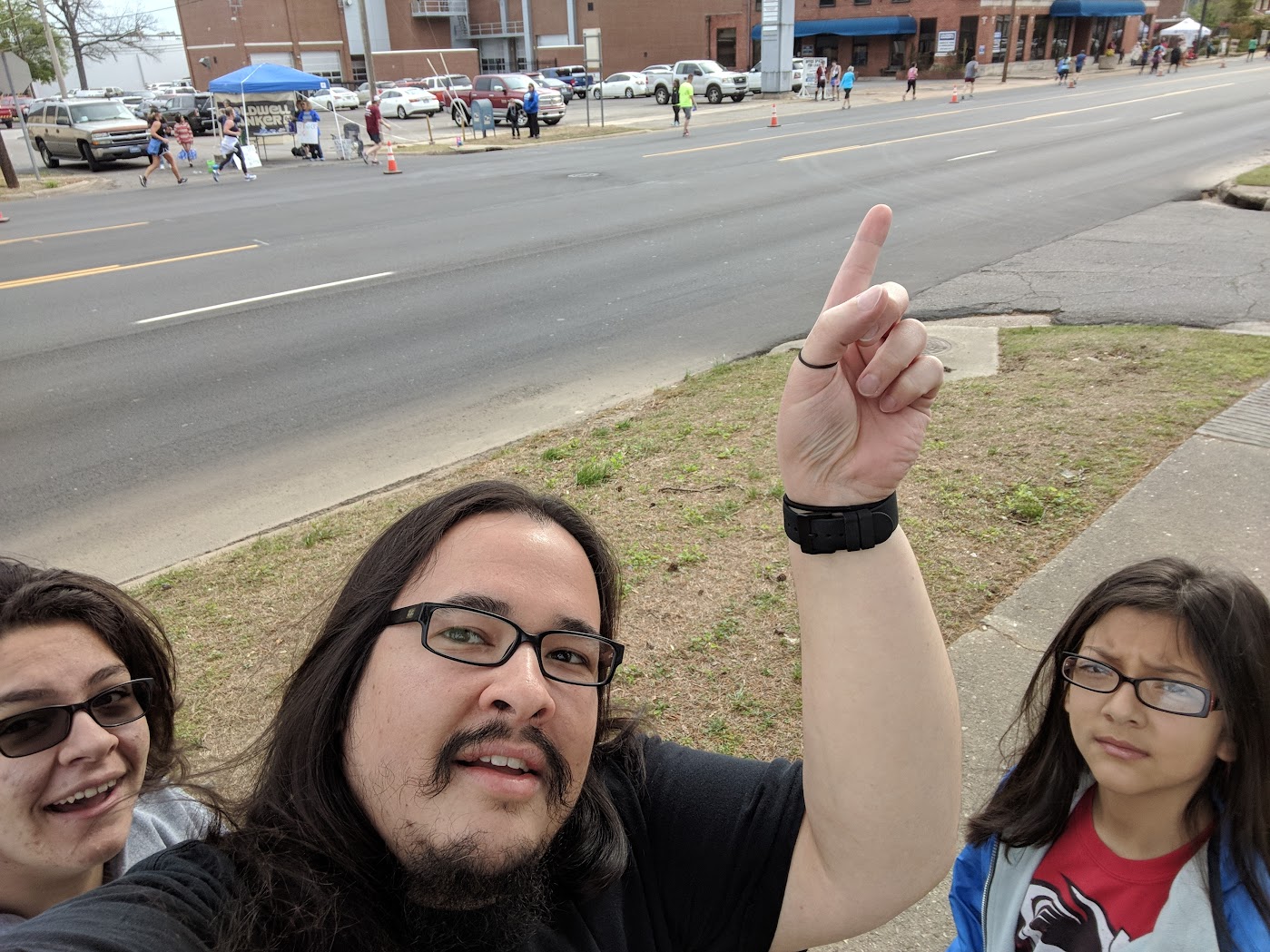 Summer went to her half marathon this morning, and it was up to me to get up with the kids to meet her before she got to the end. I watched her on Google Maps as she raced past miles 2, 5, and then 10 by the time I made it out of the shower. I got everyone up, and we drove to Hardee’s where I was going to grab some breakfast and wait for her to run by, but we spotted her just as I parked, so we drove closer to the finish and walked up to find her there. She finished in just two hours and 12 minutes, and paid for it the rest of the day.

We got the girls back home, then I left to clean house and prepare for Jesica’s visit and a Suddenlink appointment in the early afternoon. They arrived at the same time, with him being about half an hour early for his two-hour window. He was super cool, and I ended up helping him run a new line from the pole down to the house. In the end, I was left not much better than before. Three of my 32 channels have a sub-optimal SNR, which evidently causes my modem to completely stop responding until I cycle power about once a day. He left me with enough cable and four ends to re-run my inside wiring, since I already have plans to run a bunch of cable in the house anyway.

Jesica had to leave just before he finished up, and then the girls showed up shortly after that. Summer was still suffering quite a bit from the marathon, so Autumn and I went to her parents’ house to feed their clowder of cats. We stopped by 10Box on the way home to pick up some food for the next day, then made it home to pick at leftovers. My parents stopped by with some bánh mì that everyone but Autumn tried and loved, and we settled in for an episode of Cosmos.

The girls went to bed, and I loaded up some PUBG with Clint, Aaron, and Jack to round out the night.

THE END IS NEAR!
– Guy in a T-Rex Costume