We got up early this morning for breakfast in the lobby, and then Summer was off to The Great Inflatable Race. I went back up to the room to shower and get things packed up before she got back. Her race ran a little behind, but she still made it back in time to get showered and primped before our late checkout time. I even tucked my shirt in and wore a tie for a few minutes.

Our first stop was at Shoe Carnival in the shopping center by the hotel. She wanted some new shoes for her dress, and I walked around holding some shoes for a while that I ultimately returned before checking out. Then she wanted to go to the McCain Mall right up the block. We made a loop through the whole place, really only stopping at Dillard’s, GameStop, Victoria’s Secret, and finally Spencer’s where I picked up some Rap Snacks for Dale. We were out just long enough to work up a bit of an appetite, so we made our way back over to Red Lobster.

There was only a really short wait for our Lobsterfest to start. Summer got a lighthouse glass without having to steal it, and I begrudgingly ate a sirloin because it was smothered in lobstery things. The lobster pizza appetizer was good, and Summer had a margarita that was unexpectedly the size of her head. I helped her on it just a bit as we took turns getting brain freezes. Then it was off to the Verizon Arena.

We paid for pretty decent parking, though in hindsight I think the block further for half the price may have been a better deal, and ultimately gotten us out of traffic faster. We got to the arena just in time to walk right on in and find our seats, which were also right by the entrance. Summer had a really great time while I fought with my Eargasm High Fidelity Earplugs. I think my ear canals turn up sharply, which causes the earplugs to seal shut. At least I got to learn that now before going to a concert that interests me personally. I kept them in to save my hearing, but the audio was clearly muffled unless I used my fingers to tweak them slightly in my ear canals. 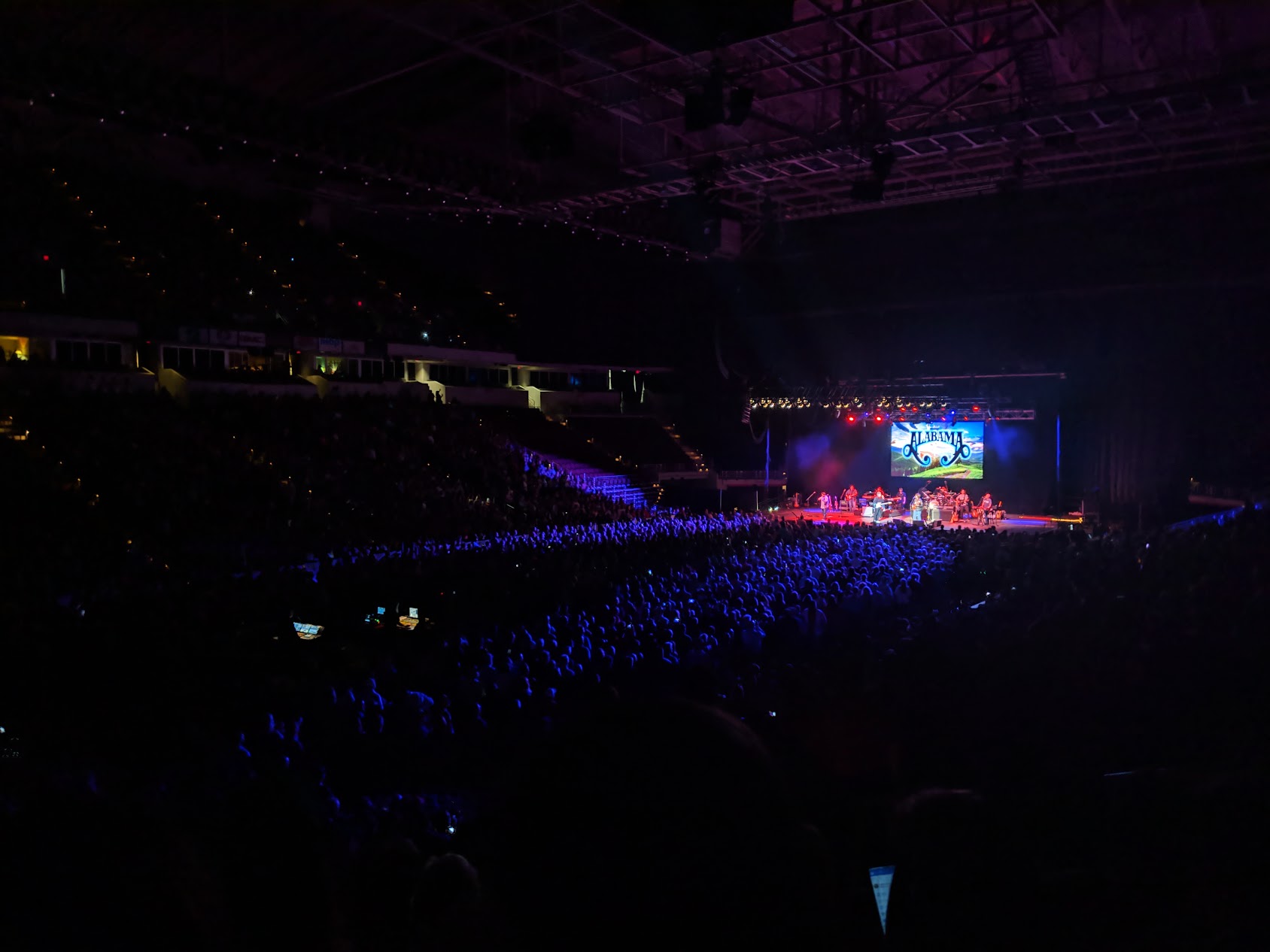 I only recognized one song all night, which was by the opening Charlie Daniels Band. The Devil Went Down to Georgia was a staple for my Diamond Rio MP3 player in high school. Summer only knew it and maybe one more of their songs. The real treat for her was when Alabama came onto the stage. She got excited at several of their songs, none of which I could recall ever hearing in my lifetime. I was surprised to hear them go on and on about how many awards they had won and how many chart topping singles they had, partly because I’m only used to hearing rappers do that, and partly because I had never even heard of them. I spent the rest of the evening more in a state of discomfort than anything else. It was hot and cramped, and the band kept doing what I can only describe as a pop quiz after nearly every song, where they had the band start playing the song they just finished and tried to coax the crowd into singing the chorus a couple more times. Of course a country concert wouldn’t be complete without a pickup truck brand roll call, which was just a huge circle jerk of more things that I hate. Even the encore was lazy and uncoerced, as the band had barely left the stage long enough to take another shot of that Tennessee whiskey before coming back out. It just felt like they were pandering to the meme of assumed encores.

Fortunately we got out more quickly than we had come in, until we got into the traffic. It started to sprinkle as we walked to the car, but it wasn’t too bad. There was a questionable guy outside selling shirts at a significant discount from their inside asking price, so we grabbed one of those on our way out. I should have planned the escape route more before taking off, but I was so concerned about beating traffic that I ended up looping through a few more blocks of it than necessary. There was quite a bit of traffic on the interstate as well, almost all the way to Conway. The rain cleared up enough that it didn’t feel so dangerous to be cruising down the highway though, and we made it home just after midnight. Summer crashed pretty much right away, still high on her birthday vibes. I’d say today was a success.

I done told you once, you REDACTED