The girls got up and left this morning so I could get ready for our trip. Summer dropped them off with her parents so we could go to Little Rock for The Great Inflatable Race. I got going quite a bit later than I originally intended, but it all worked out in the end. My ghost shrimp appeared to have perished in the night for some reason, but the cherry reds still seem to be doing okay.

I fed everyone else, and left to pick up some Starbucks on the way to get Summer. I ordered a “featured drink” called the Iced Cinnamon Cloud Macchiato, that I simply could not recommend. Someone must be tickled to pay for air, but it’s certainly not me. You can keep your whipped cold foam that fills half the glass. I didn’t even know how to drink it all separated like that. Luckily enough, the foam collapsed by the time Summer got into the car, so the rest swirled nicely in the cup. 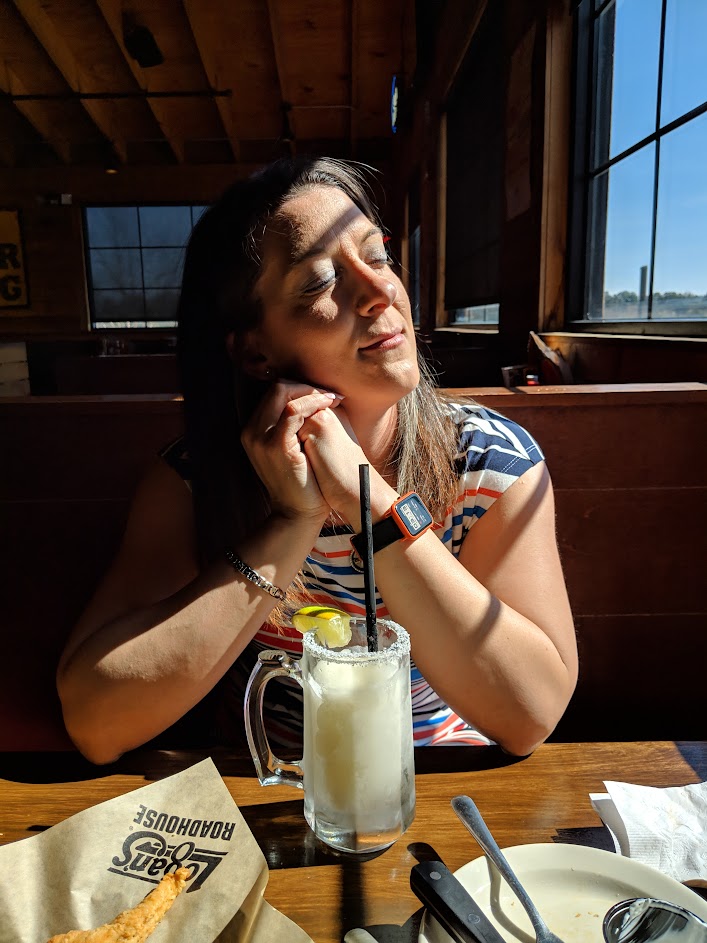 We first made our way to Conway for a free birthday appetizer and happy hour drinks at Logan’s Roadhouse. The waitress seemed a bit lazy at first with her reluctant response to my request for soda water. She reported back after she found it at the bar where I knew it would be, but fortunately she turned the experience around after that, and we had a good time sipping drinks in the sun coming through the window.

Next we made our way to Red Robin where I had a free birthday burger. Summer got a BLATT with bacon, lettuce, avocado, tomato, and turkey. I got the Burnin’ Love with the jalapeño on top. We both ate too many fries and had to take half of our sandwiches to go.

Our final birthday promo gauntlet stop was at MarketPlace Grill for dessert. I had a $10 voucher, so we both ordered desserts and got out for like two bucks. She got an apple crumble dish with ice cream, and I got a cheesecake with raspberry topping. Hers seemed good. My cheesecake was dry and possibly overcooked, and didn’t have enough raspberry drizzle. Both seemed like really tiny portions, but we ordered the full size portions, so I’m puzzled whether the smaller option would come on a baby food spoon. Service was great though, and I guess I can’t complain too much for getting out so cheap.

We completed our trip to Little Rock with a stop at Academy in Sherwood to pick up Summer’s race packet. They didn’t have her shirt size there, which aggravated her since she preregistered quite a while ago. She did find some leggings with a pocket on clearance though. From there it was a short trip to the hotel. It’s right behind Red Lobster, so I think I know what we’re doing for lunch tomorrow. Summer watched some gymnastics on TV for a bit, and then The LEGO Ninjago Movie played us out for the night.

It’s amazing what those girls can do on a 4-inch beam.