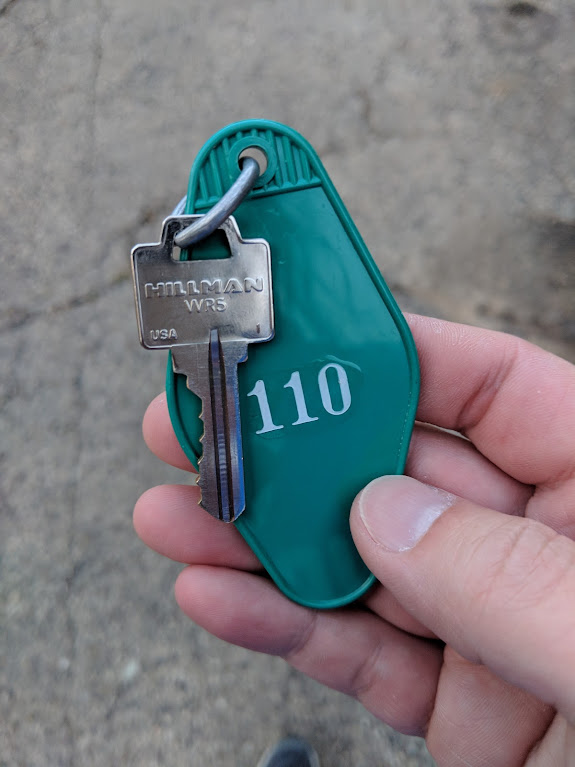 We slept in late today after a pretty rough night of sleep for me at the Red Roof Inn. It took us another nine hours or so to get where we were going after all the extra rest stops. We stopped just before St. Louis for some pretty great barbecue and were waited on by a kid from Hector while we watched competition level cornhole on the television. Several hours later we finally landed in Sun Prairie just after dark, and then went through the arduous process of finding a place to stay.

I don’t know what was happening in town, but virtually every place we went to was booked solid. We did find a $200 hot tub suite, but passed since we only had about five hours to use it before we had to be up to go to Beth’s event. That was also news to me. After both calling and driving all around greater Madison, we ultimately crashed at a tiny motel just a couple blocks from Beth’s place. I just knew we were going to be robbed and murdered. I was wholly reliant on Summer’s intimidating looks and extensive karate training. It was exactly the kind of place you stay when you shave your head and the random girl you’re with dyes her hair in the sink because you’re both on the lam with some kind of government conspiracy-proving evidence. I’m pretty sure Bruce Willis was in an adjacent room.

To add to the disappointment, the front desk clerk was the first person I’d encountered on our entire trip that spoke with any kind of an accent, and it was thick Indian. Apparently Wisconsin forgot it was a northern state and people sound the same here as back home.