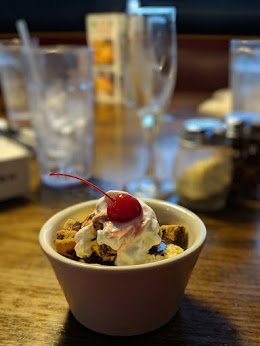 I got up this morning and came home through the drizzle to take care of the pets and clean up while the others got ready at home. Then I picked them up to go to Conway for the day. We made it to Old Chicago for lunch, which was a treat. Not only did I have a birthday discount, but they accidentally made the kids’ pizza on the wrong crust, so they gave us the extra wrong pizza for free. There weren’t any complaints about it, and I even had a slice myself that was delicious. They had some pretty good looking brunch menu items that I wouldn’t mind coming back to try. I even got a free ice cream with some cookie dough bits and a cherry on top.

Stuffed to our ears, we loaded up and headed to Sam’s to look around. I had a $45 credit from my promotional signup that I used to stock up on a bunch of bulk meds, and then I grabbed a bag in a box of Coca-Cola on the way out. After doing the math, 2-liters of Coke on sale are quite a bit cheaper than the syrup from Sam’s, but I wanted to try it out at least once with the SodaStream to see how I like making diluted, super-fizzy drinks. The kids got restless and ended up waiting for us in the deli area, where I also ran into a pair of my esports parents. They said they were really excited about it getting their kid out of the house, which is a phrase I literally never would have associated with video games. But it’s 2019 and esports are genuine high school athletic sports, you can pick your own gender, Donald Trump is the president of the United States of America, and I am a coach in a public school district.

We had time for two more quick stops before the movie. First it was Books-A-Million, and then it was Five Below. I had to cut it short at the last stop because I wanted to make sure we could make it all the way across town without incident. We had a little time to spare, but I also didn’t feel like we were really missing anything for it. The parking lot was super full, but it didn’t seem like the theater was as packed as I’ve seen it in the past. There were still plenty of open seats around the ends of the aisles. Autumn wanted a collector’s drink cup and tin of popcorn, and the girl at the register told us she could make it a combo with a shirt for the same price, which was pretty awesome.

Noah was the most upset at the movie’s faults. I didn’t love that they broke the Strategic Homeland Intervention Enforcement and Logistics Division gag, and it was weird that Fury called it SHIELD right off the bat when he met Vers. I was also a little fuzzy on the timeline for the tesseract, but some Googling after we got home made me feel a little better about it. Most notably though, the character is unapologetically overpowered. I agree with critics, and think that flying through enemy spaceships to destroy them was a bit too easy.

When we got back to town, I dropped Noah off at home, and the rest of us came back to my place to watch Man of Steel after talking about how bad Justice League was. I guess we just needed to crack the DC universe. At least I really liked this first entry. Autumn passed out before we even got started, but the other two seemed to like it alright.

Did my washing machine just travel through time?