Summer had her RussVegas Half Marathon this morning. I had delusions of getting the girls out early enough to eat breakfast and cheer her on, but we weren’t up in time for West Main Donuts, and Hardee’s evidently closed due to a fire. We ended up getting some Burger King to go and made it downtown, parked, and walked toward the finish line just in time to meet Summer at the last turn toward the finish. She didn’t see us and I didn’t have my camera up to take a picture, but she looked to be in significantly better shape than pretty much any other run I’ve seen her participate in. 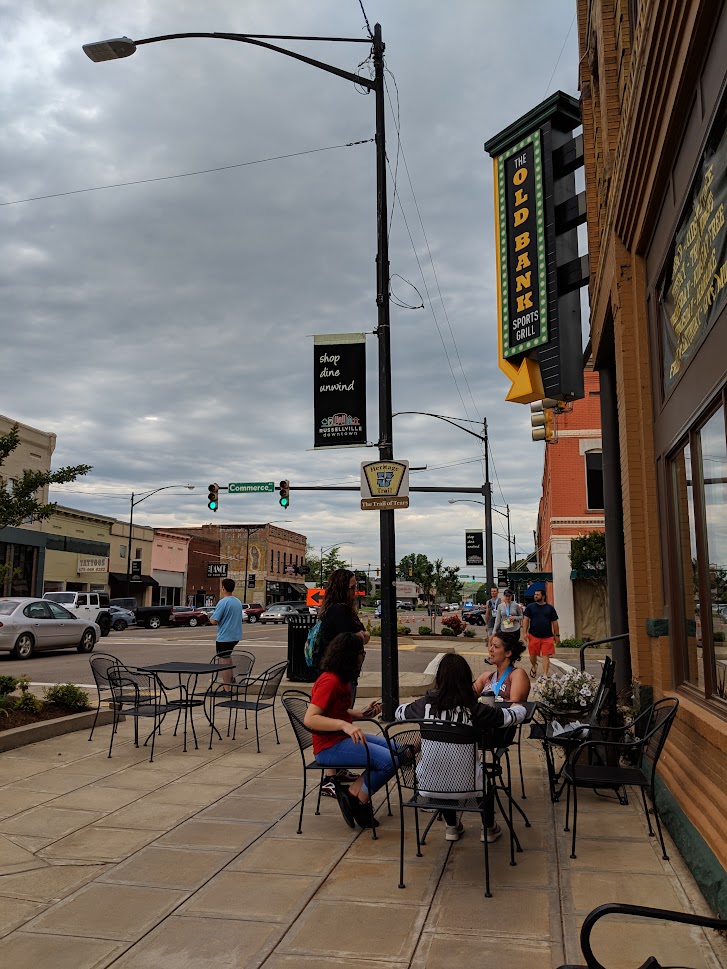 We walked toward Old Bank and sat at a table just outside for a while to eat our breakfast. I ran inside for a moment to say hello to Ryan and told him we were going to come in for a Quiz Bowl watch party for the high school team on AETN. Nobody around him had heard anything about it, but eventually we meandered in and ultimately filled up a room with maybe 50 people. The girls picked mostly a bunch of snack food to eat, and I had some “street tacos” that were good, but not what I would consider deserving of the “street” title. I’m only just remembering that I forgot my leftover cheese dip on the table when we left.

Summer took Autumn back home, and Eaddie and I went to my house so I could clean up a bit. Evidently the litter box took off on its own and left wet litter, so I had to spend most of my time cleaning up after that. She watched TV until I was ready to go, and we went back to their house so I could swap Eaddie for Autumn. I had to take her to her grandparents’ house to mow the lawn, and then I went to my parents’ house and helped Dad plant the baby raspberry bushes. I really hope they make it, but I also secretly wish they were blackberries.

It started to rain a bit, and Autumn finished with her mowing. I went to get her, then Noah, and we went to Lowe’s to scope out the promotion they were running. You could basically get free money to use in store today only by texting a word to their promotion number. I had everyone and then some try for me, but I never found anyone with more than $5. Autumn and Noah were pretty restless and agitated that I kept them there as long as I did, so we grabbed some snacks for (mostly) free and went back to their house.

Some of us were getting hungry, so I made a game plan and loaded everyone up. We went to my house so I could measure the toilet seat. Then I tried unnecessarily to switch Noah’s phone service to a different device so I could get his coupon code. I didn’t realize he was able to get the response but unable to view the web page, so in the end I just had him forward the text to me. Then we went back with all five codes and picked up a new toilet seat and four bags of Miracle-Gro® Performance Organics™ All Purpose Container Mix, which I’m hoping is their new name for Miracle-Gro Organic Potting Mix. I wanted to use it to plant my aquariums and also not murder my fish. Time will tell.

We finally made it out of the store just a little bit before closing time, and went to my parents’ house for dinner. Autumn ate boring ham and steamed rice, and the rest of us had bún bò Huế. After dinner, I tried to troubleshoot my parents’ first generation Chromecast. It would show video during the boot process, but then go to a black screen after the “G” logo. The online support just had me submit a feedback report, so we’ll see what happens.

With the whole troupe exhausted, we headed back to their house for the evening. I couldn’t resist a huge glass of water before bed, but I think tomorrow will have to be mostly dry to make it through Endgame.

Peaches come from a can! They were put there by a man in a factory downtown.