I had a pretty slow morning again, mostly due to lack of desire to accomplish much. I ended up at the shop for a while before lunch, where they had a lockdown just before I arrived. For a while, it was the safest basement in all the land, with at least four cops and two of our security guys. I legitimately lost count.

Ronda and Jessica wanted to take the time to go out for lunch with me, so we went to Ruby Tuesday for $5 salads. It was delicious and green, but most notably the peaches were amazing. I don’t know why I don’t get more peach things more often.

After lunch I had to go to the high school to help with keyboard bezels. We got pulled away twice to go to the safe room due to some storms that rolled through. The second time, I brought some bezels along with me just in case we got stuck there for a while. I only had time to do one replacement, but it felt good all the same. We finished a big stack of them just in time to go to the library for Dale’s retirement shindig. 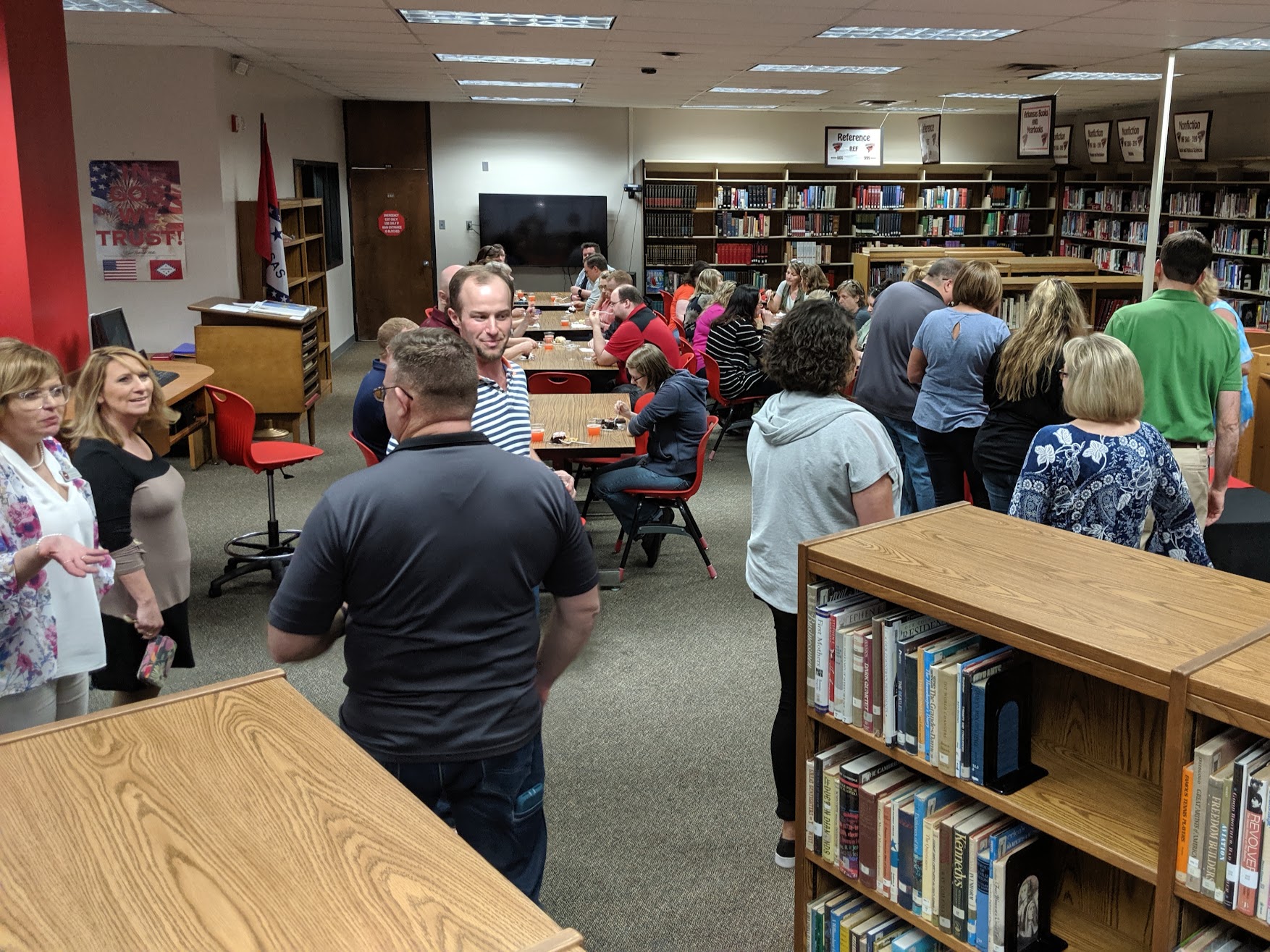 It really seemed like we crammed more people in that library than Alene had at the Center for her retirement, and it felt good. I’ve never made it to the very first part of anyone’s retirement party, so I assume it’s at least a little customary to say some words. Regardless of what normally happens, it wasn’t unlike Dale to have a story. He recalled starting his adult life in the high school library where he spoke with a recruiter that got him into the Marines. Eventually he retired from that and came back to the school district, where he had a retirement party in the same library. It seemed as though he might have started to choke up a bit, and it was sweet. I’ll really miss him.

Hannah had agreed to babysit my esports kids until I could get back to the junior high, so after the party I ran over there for just the tail end of practice. It was a pretty small crowd there, since most had been checked out early, or didn’t even have to come at all after being exempted from finals. I wish I had prepared for the end of the year, and the last week of practice better. I gave the district magazine to those that wanted it for the article about us. Then we took a trip to my office where I handed out a couple old computers so they could practice at home. I should have prepared for that better too. Having to move to high school has me all kinds of messed up.

I worked super late, but finally made it over to my parents’ house for some leftover mango soup. Then I helped Dad fix his smart garage door opener I had gotten them. I guess he misread the directions and wired it up incorrectly, so we fixed it without too much trouble. From there, I headed home to try and clean up, but half got distracted by email, and spent a large portion of the remainder of my evening unsubscribing from several of the overly talkative newsletters. Tomorrow morning it’s back to the high school to learn more web forms for submitting these tickets. I’m going to hate that so much.