Summer got a portion of her loans forgiven today, which was a great start to the day. I made it to work just in time to squeeze in for our morning training, and then Kyle and I were sent to the junior high to do work orders. Virtual Fridays at the high school actually give me a pretty good break anyway, so it at least seems possible to keep work orders under control.

I left Kyle to service laptops while I visited a couple rooms and closed out individual work orders. I spent the majority of my time in the library just so I had some office space to use. Then when lunch time rolled around, we headed back to the shop to meet up with most everyone. The high school had burgers grilled by First State Bank, so we headed that direction.

When we got to the high school, we rode all around trying to find a grill outside, but after fist-bumping the superintendent from my Shadow, we found the food inside. He actually came and sat near us, which could have gone either way, but it wasn’t long before Mary Beth came to occupy his attention.

I spent most of the afternoon there at the high school, but ended up back at the shop just in time to see Ben’s email that we could leave early to go vote. I ended up sticking around until after four just chatting with him about life, politics, and everything anyway. When we did finally leave, I just missed him in finding out my battery had gotten too weak to start the bike. Luckily I had access to the tools, could strip the bike, and then get a jump from Jared, who happened to be right there chatting with someone else. 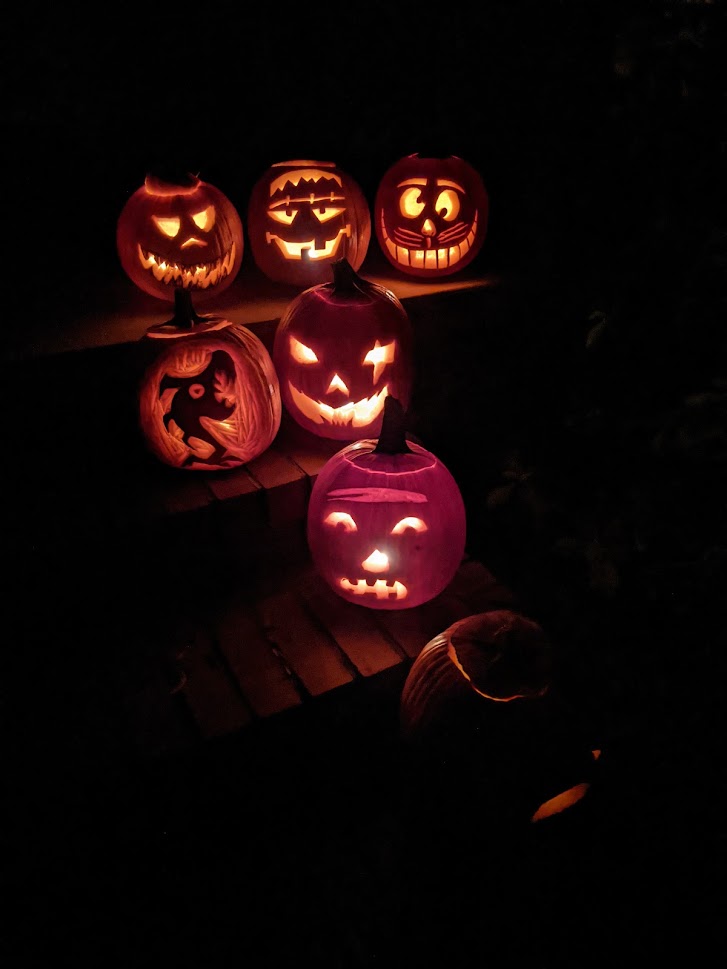 On the way home, I stopped by the shop to see Summer, and then we went to my house to get the car before getting gas and picking up the kids to go to my parents’ house. We already had the pumpkins there, so as soon as Julie showed up, the kids got to carving. Mom was the only one that refused to participate, and I was honestly really surprised at how well every single one of us did. Even after Autumn’s broke and was left looking like an upside down helmet, I could make it resemble a tiny house at the right angle.

I tried, for the first time, doing some shading by not carving all the way through the pumpkin. I hand-sketched a shadow monster from the game Don’t Starve, then used an Xacto carving knife to slowly dig deeper and deeper into the pumpkin until there was just a thin layer of flesh inside.

We took a bunch of pictures and then picked at some leftovers before heading home for the evening. Hopefully the slugs won’t devour our pumpkins overnight, so we can have some to eat later.