It rained pretty much all day long. The storm must have knocked out my power for a brief moment in the night, because I woke up at one point and all the living room lights and TV were on. I stopped by Oakland briefly in the morning to take care of something, and then went on to spend most of the day at the junior high cleaning up old computers. Of course the storm affected some things there as well, so everything in my office was off, and I had at least three projectors fail to come on in the morning. Luckily they all came back up after being unplugged for a few minutes.

Brice and I met Allen and Jason at Morellos because neither of them could hear me offer to drive everyone in one vehicle. It was Zach’s birthday, but I couldn’t convince him to come with us. Those that did go were just as lively and fun as ever. 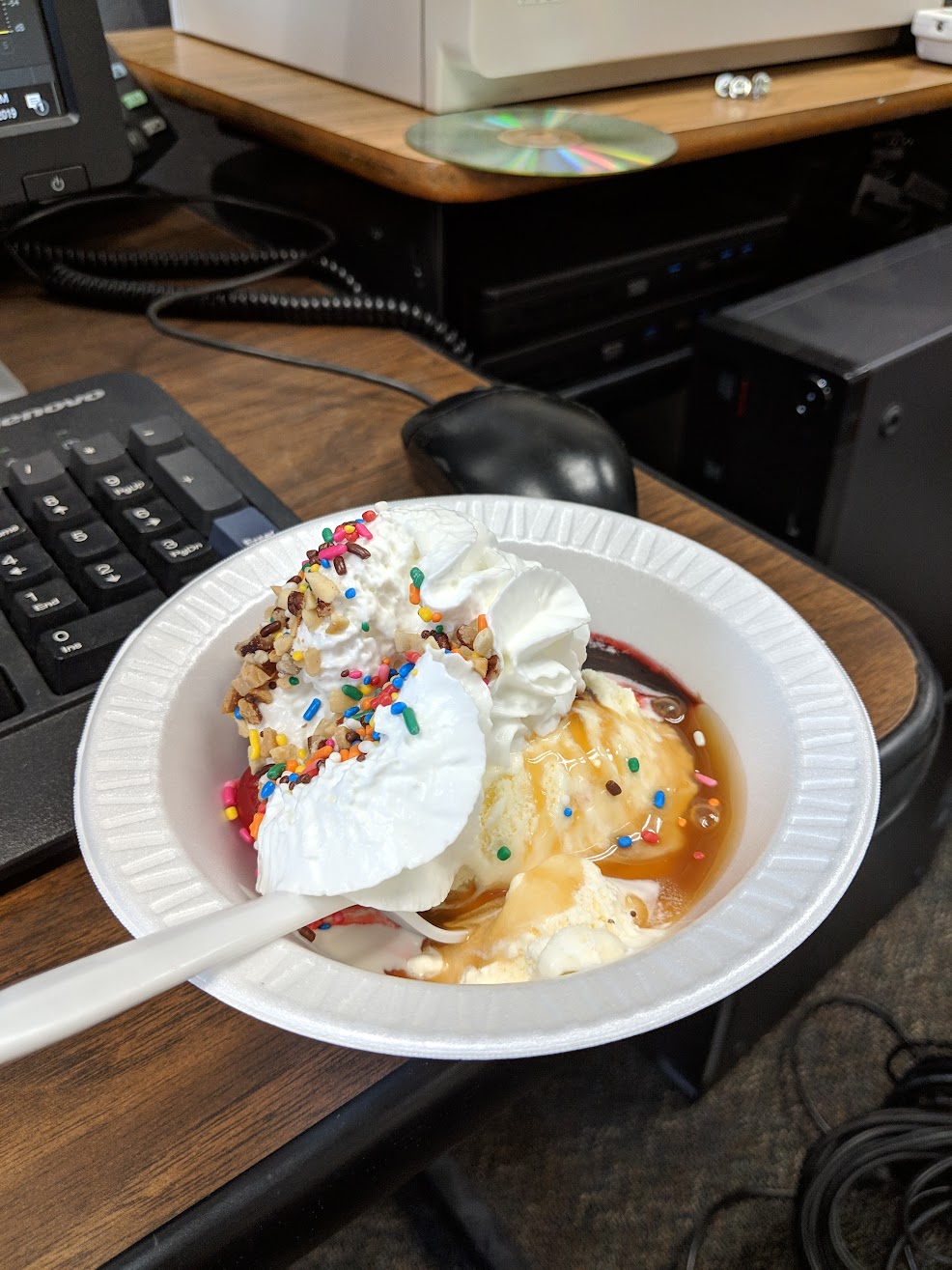 After lunch, the junior high office staff was making rounds handing out ice cream sundaes, and after hearing about so many resignations it started to feel like an emergency morale booster. Matt had even made a comment about me leaving earlier in the morning, but as far as I know he doesn’t know anything about that yet. I hope everyone understands that it’s not my choice.

Summer started feeling sick in the afternoon, so I went to the Spices food truck to get some noodles for her while the girls went to karate and then dinner with their father. While I was waiting on that, Mollie texted and said she had read the blog about me moving to the high school next year. It always surprises me a little bit when I find out someone has read any of this. I hope it can serve to be at least a little bit entertaining, since I typically only end up using it for fact-checking myself. I’ll have to talk to all of my friends that I’ve made over the past couple years soon to let them know what’s happening. It’s going to be so overwhelming to make the switch.

When I got to Summer’s, she was curled up on the couch staring at nothing on the TV. She loved the shrimp fried noodles, but she slowly dragged down little by little while we watched Parks and Rec until the girls got home and I put her to bed. I was pleasantly surprised to see several of the esports kids in voice chat on Discord trying to organize some games. It’ll be much easier with a larger pool of high schoolers, and it will be interesting to see how the different age groups interact with one another.

Back home, I cleaned up and then got in a little Overwatch time for some event loot boxes. I had been needing some game time for a while. It was too bad that nobody else was around for that, but I couldn’t bring myself to queue LoL with the kids just yet.

Can’t let the kids know their coach is a filthy casual.