I ran home to get things ready for my conference. We didn’t get out of town quite as early as I wanted, but I probably would have been too tired to do much else anyway. Once I got everything packed up and the pets all fed, I went to get Summer and we went to the high school to pick up a laptop. Dale came by his office just as we were finishing up, so we chatted with him for just a second before leaving.

We hit the road in the middle of the afternoon, stopping for some snacks in Ola before making the rest of the trip. It didn’t seem like a long drive, and I didn’t have any traffic in front of me for most of the trip. When we got to the Staybridge, the a guy from maintenance was in the room trying to fix the garbage disposal. I told him it wasn’t a big deal, but he wanted to fuss at the front desk anyway. We took all our stuff back downstairs and then stowed it away in one of the conference rooms while we went out to eat. I had heard about Fisherman’s Wharf in my past travels, and it was just across the bridge from the hotel. It seemed really tiny from outside, but once we got inside and chose to eat outside on the desk, we realized just how big it really is. They had a pretty impressive outdoor seating area, and the food was pretty amazing. Summer kept getting up to take pictures of the geese and turtles. I was most impressed with how many roll up doors they had. I counted 19, and we can’t get even one for our warehouse. We sure can renovate an auditorium for the super’s singing club, though. 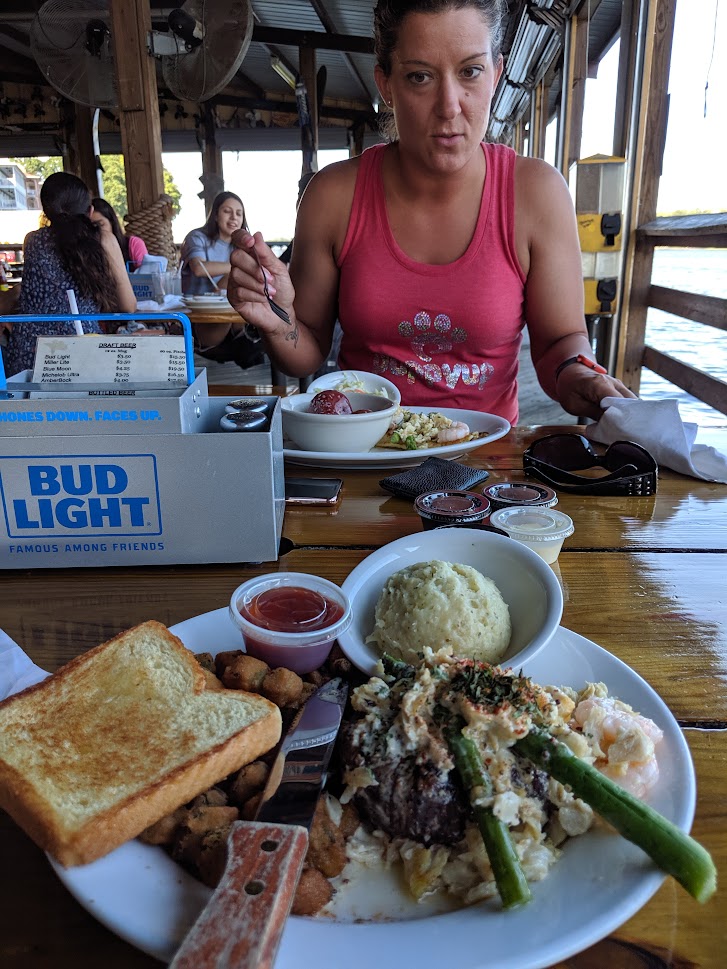 After we ate, we went back to the hotel and got moved into our room, then went downstairs to check out the social. We found the theater room and decided to tuck away in there for a movie. They had 13 Going on 30 on the counter, so I stuck it in and philandered with the remotes a while until I finally got it to play. Amazingly, Summer had never seen it before, and I thought it was right up her alley.

Once the movie was over, Summer went up to bed while I tried to make sense of my schedule over the next couple days. I guess tomorrow night I’ll have some time to try and put my thoughts together on how to present for my breakout session.

I do my best work when I’m rushed at the last minute, because I never complete any work until then!