We got up early this morning after a pretty good night of sleep. Summer went to pick up Autumn and get Eaddie ready for her concert. Dependable Air Conditioning made it out to fix her A/C, and just finished right as I got there after my own shower. We had just enough time to get to Tech to attend Eaddie’s band camp concert, which was held at the Doc Bryan lecture hall since Witherspoon was closed for renovations.

Eaddie made second chair in the symphonic band, so I think they were the last to play. It was a little crazy coming in, but by the end, I walked out of the room and out of the building without anyone else around. It was probably a bit chaotic once the kids got outside with their parents, but I was happy to wait patiently in the car. Once everyone came out, we took the girls to The 3D Cafe in the old Dixie Cafe building. The fries were weird, thick curls of potato that seemed to be fried from a frozen package. We got some chili cheese fries as an appetizer, and then I had a fish and shrimp basket, Summer had a deli sandwich, Autumn had a burger, and Eaddie had a moist grilled chicken sandwich. Everything was delicious, but I thought the portions were a bit small.

When we got back to the house, it had cooled down nicely. Summer had Eaddie start cleaning the house while she mowed the lawn and Autumn and I went to get groceries for dinner. On the way, I remembered that PetSmart was having a Reptile Roundup with coupons and a free mini “habitat” that was a derpy looking cardboard lizard in a plastic tub with some sand in it. We were there right at the end of the event, but still nobody was around the table at all. I stood there until one of the guys came by, and I asked to make one. Autumn was only focused on a kitten and refused to make one. I loved it though. 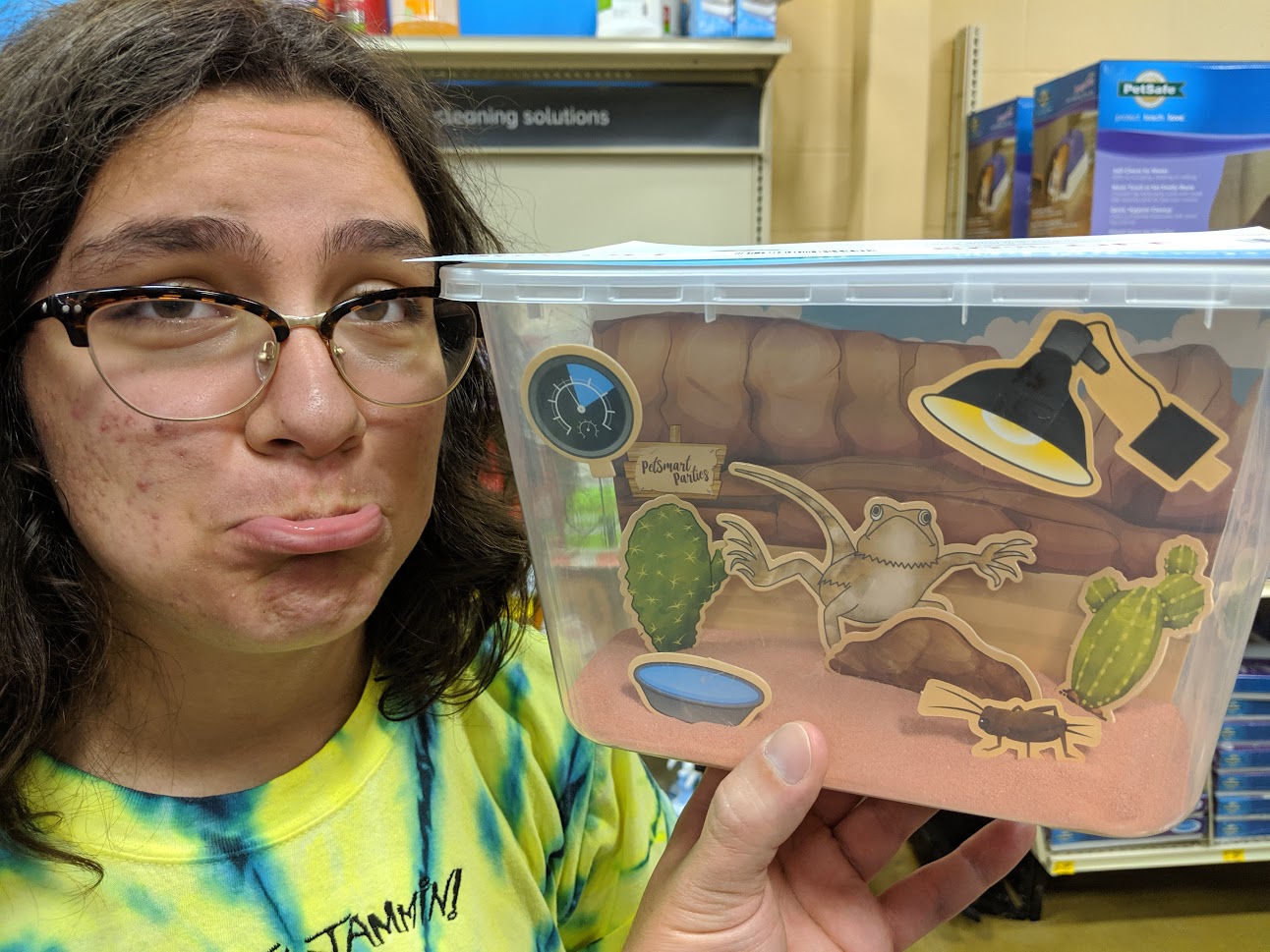 Finally we went to Walmart to get what we needed for dinner. I didn’t stray from the list too much, but I did choose to run home for some Gatorade instead of buying more powder there. Travis had to cancel coming over for Catan, so on the way back to Summer’s, I picked up some more zucchinis so we could feed my parents instead. Summer made little canoe-shaped boats out of the zucchinis that were cut the long way, and then cooked up some ground beef into meat balls. I boiled the potatoes for mashing, and we took everything to my parents’ house to assemble.

When we got there, Summer loaded the meatballs and I covered them all with pizza sauce and cheese before sticking them all in the oven. They turned out really well, and everyone seemed to really like them. I had trouble with the concept at first, which was difficult to wrap my own head around since I really liked all of the individual components of the meal. I just didn’t care much for the combination. After I finished one, I had gotten a taste for it though, so I had another before I went out with Summer and Autumn to swim.

It eventually started to look like lightning was coming in, so we dried off and came back inside. It started to rain quite a bit before we could get out, but after a few more minutes of waiting, we made it home. Everyone was completely exhausted, so everyone made it to their bedrooms pretty quickly.

That’s one derpy lizard. I love him.