The Catapult Health Clinic was at the middle school today, and I had my visit scheduled first thing in the morning. They seemed to be running a little slow, so it took me a few minutes to get in, but it wasn’t any worse than going to my doctor’s office. The difference is that they had me do all the paperwork right there with them while they sampled my blood. That’s about the time that shit got cray.

My first blood pressure reading was 188/122. I’ve never paid particular attention to those goals, so for me it was business as usual. The second reading was 170/111, which was more than 10 points off of the first reading, so I got a third at 186/127. That’s when a different nurse came over with an alarmed look on his face. He called the first girl back over and asked what they should do, and she replied that the video chat nurse would probably just talk to me about it. After a brief wait to go behind the video chat curtain, a nurse practitioner video chatted with me and brought up a warning/disclaimer to call my doctor immediately.

I went to Oakland to do some work and told the girls about my experience, so Leslie took my blood pressure again at 183/114. Nearly an hour later, I had relaxed it down to 174/114. I was less concerned, but already coerced into calling my doctor. I could have gone in right at lunch time, but I was already hangry at that point, so I scheduled a visit for 2 in the afternoon and went with a big group to lunch at Western Sizzlin where I had an incredibly unhealthy salad. It could have been better.

After lunch, the doctor visit went relatively well. They had renovated most of the building, and pretty well removed my old doctor’s name and replaced pretty much every comfort of familiarity. I hated watching the reel of healthcare advertisements in the lobby. At least everything else looked cleaner and less dingy than before. The first nurse got my blood pressure at 160/90 in both arms and said it wasn’t that bad, and blamed the high numbers on the auto-cuffs we had used all morning. A short wait later, the ARNP came in and basically said the same, but then followed that she was prescribing some low dosage blood pressure medication. I’ve officially made it to the stage in life where I’m kept artificially alive. Also, I have ringworm.

I went straight back to the junior high after my visit was over, and had Chrystal take my blood pressure again. She had a manual cuff like the doctor’s office, and came up with 182/110, which served only to confuse me more. Convinced that Death was following me around, I continued on with the rest of my day. Summer left to go to the gym, and I took the girls to Walgreens to pick up my prescriptions before going to my parents’ house for dinner.

My parents seemed not to be too concerned with me getting medication, and leftovers were good. All I had left to do was research my new drugs.

Until I got home. 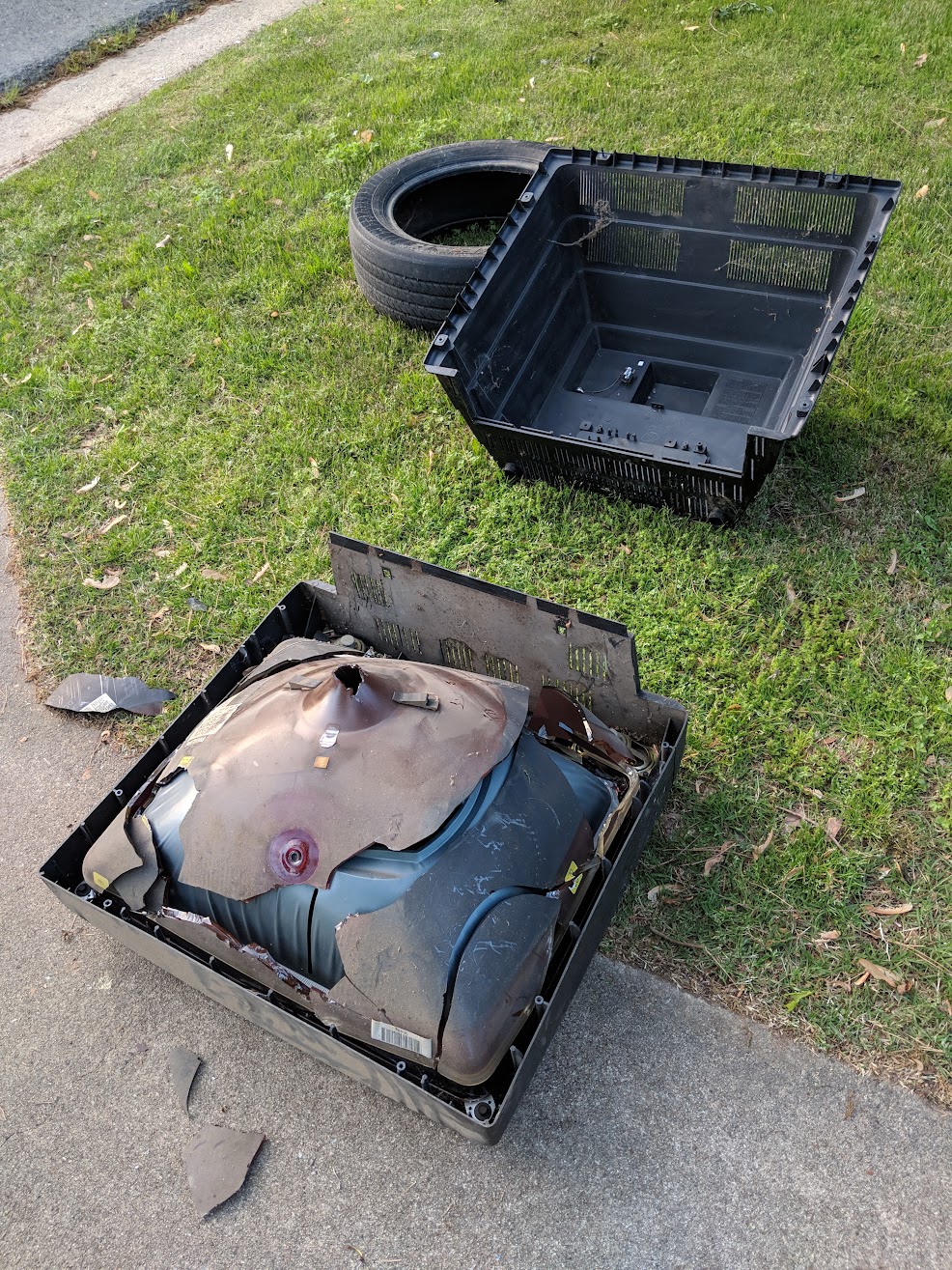 Bulk item pickup day apparently didn’t include tires or televisions, so both were left in my front lawn. The CRT TV chassis appeared to be split open, so of course it fell completely apart as soon as I touched it. The glass immediately shattered, half on the grass and half on my driveway. I would have preferred to sweep it off of only the driveway, but that would have left me feeling less defeated. My new, concerned neighbor laughed at my response that I was okay, but contemplating life.