I actually had a good, solid day of work today, even as scattered as it was. Gary, Allen, and I went to hang a couple TVs at the high school, so I actually got to call the shots. We actually had to relocate a touch panel to another room, and then install a new TV for the new JROTC room where choir used to be back when I was in high school. They wanted to fill in the pit but didn’t get it done in time, so I wanted to make sure to mount the TV super high in order to prevent having to raise it in the future. That required us to climb the ladder, and they had just finished cleaning the carpet, so we saved that soggy room for after lunch.

Moving the heavier InFocus touch panel downstairs proved to be a bit of a challenge, and we ended up getting a couple deep scratches in the screen in the process, but we managed. It’s not a full-time classroom anyway, which makes it matter a little less in my mind. The trouble arrived when we had to drill into the outside concrete wall of an underground part of the building. It was reinforced in a way that made it nearly impossible to drill with our bits. It’s possible that if we had brand new bits it would have worked, but I’m still leaning toward the magic ones we got from the maintenance department that knows what they’re doing. As far as I’m concerned, Jason didn’t buy them, so they were the correct tool for the job.

Somehow Allen and I talked Gary into going to KFC for lunch. Partly because I offered to buy, and partly because he wanted to try the Cheetos sandwich. He thought it was a cheapie sandwich and not some kind of fancy, high-dollar promo, but based on flavor alone it was worth a re-order. I just thought it looked really small for the money. 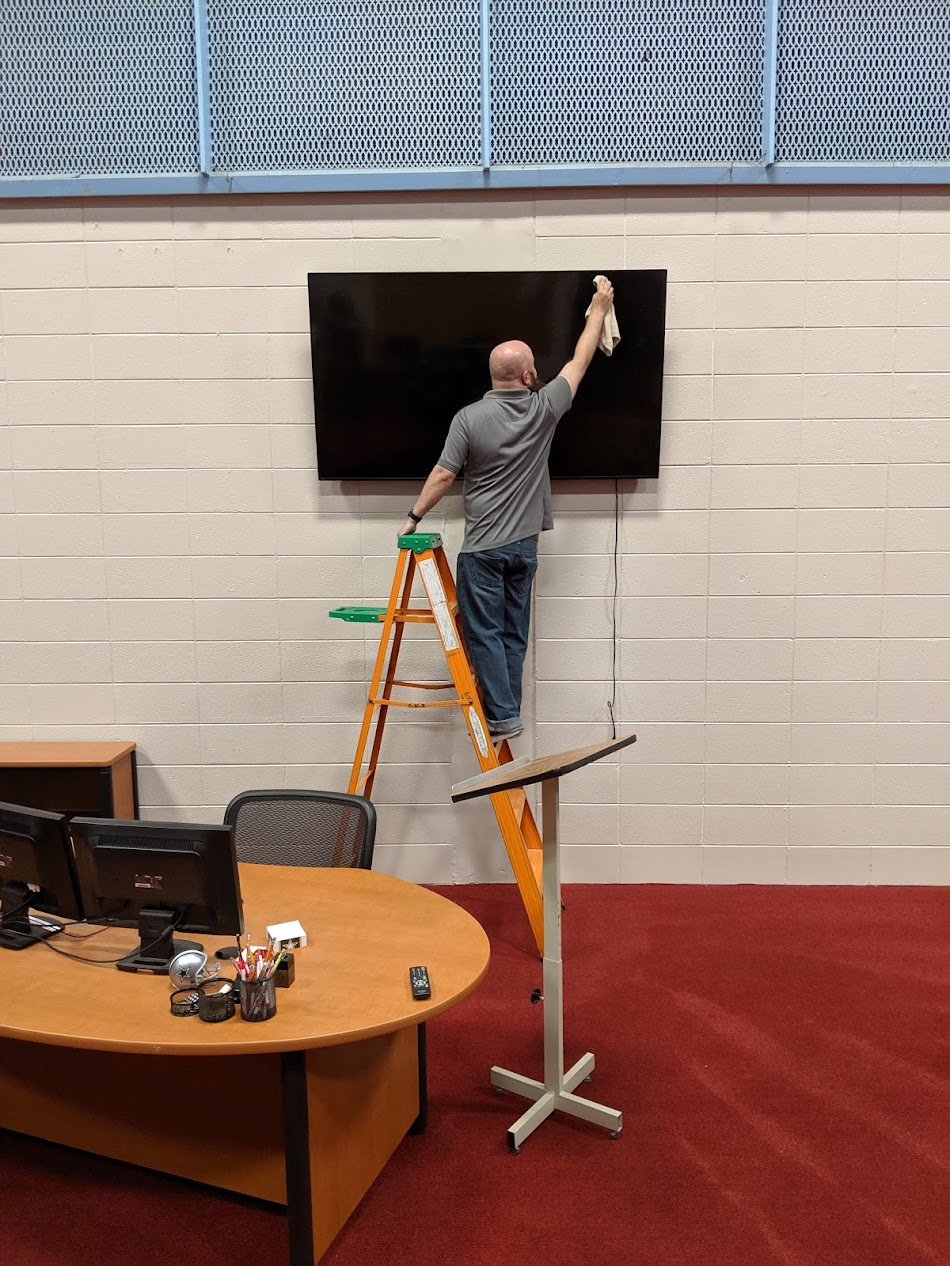 After lunch we got the JROTC TV hung by having the other two lift it over their heads, and then I moved the ladder up behind them and lifted it up the rest of the way. Without power, speakers, or even a properly positioned desk, we skipped the test phase and moved back downstairs to finish running cable for the touch panel. The ceiling tiles looked really gross, but surprisingly there was a ton of room in the ceiling. It was wide open without insulation. I did all the climbing around, but the guys were helpful and entertaining in their own ways, which made the hard day’s work more satisfying.

I ran home to change after work, then went to pick Eaddie up to mow my parents’ lawn. She was in the middle of warming up a bowl of ramen noodles though, so I let her eat them while we watched an episode of Jessica Jones. Summer came home after taking a spill in the pit at work, so I left her to clean up while Eaddie and I went to take care of the lawn. Summer came over when she could, and then I swam with Eaddie for a bit before heading home to clean out the laundry room well enough to get to my appliances and start a load of laundry.

They came along eventually to stay the night, but didn’t get here early enough for us to watch more Netflix, so Summer went straight to bed while I waited for my socks to dry with Eaddie.

I don’t care if you break it in the process of learning how to fix it yourself.